10 Stats, Stories and Tidbits to Know ahead of Bedlam Football 2022

Here’s everything you need to know ahead of this weekend.

How does a Central Florida QB do in freezing conditions?

Everything I see on the all time Bedlam football series shows 90-19-7. Is there something I’m missing? I like your numbers better Kyle just not sure they’re (akrut).

Are you already counting this year as a win?

Are you taking a win away from the Dirt Burglars for special nutrition plans or NIL deals before NIL deals were a thing.

I hear Sooner fans constantly say 90-19-7 is not a rivalry, but I remind them Oklahoma State owns the head to head series advantage in all sports. Not sure the most current number but OSU holds the advantage. If OU wants to say we’re not a rival, that’s fine, but their actions say different.
Just look at ticket prices for this game vs. other big 12 games. This game means more, but OU fans have this arrogant demeanor like we are so far beneath them. This rivalry involves all sports and has its roots in wrestling. They usually respond that football is all that matters because it pays the bills, but I sure do see a lot of Oklahoma softball fans these days.

The Vegas line has me concerned, but if Spencer is somewhat healthy and we throw 75-80% of the time, then I think we can get a Bedlam football winning streak established. Oklahoma State will never hold the football series advantage in wins/losses in my lifetime, so the next best thing would be to win these last few years and leave a bad taste in their mouth, and honestly after that, I’m good with not playing them any longer in football. Go enjoy your SEC where you’re just another team.

Probably about like he does in any conditions, not very good. We have to make him beat us. It will be cold, but should be dry. OU will definitely try to pound the rock. If OSU can beat OU up front and contain the running game then I think OSU gets a road win in Norman. Keep Gray at 125 or less we got a good chance.

Kansas had 350 rushing yards and K-State had 200 yards rushing against us… We aren’t containing anyone.

There she is. What QB should we start for Bedlam? Rangel, Gundy, or the “turnover machine”?

Let’s just hope they won’t be kneeling at the goal line, like a handful of years ago. Also I hope there’s no surrender flag by Gundy. Or running Sanders out then pulling him and then back out in the 4th quarter.
Oh nevermind Gundy will screw it up.

You woke up to tell us this? If i want to hear some one cry i would listen to the view.

“Probably about like he does in any conditions, not very good”

Gabriel isn’t the type of QB that Sooner fans have been used to……but he’s been better than everyone thinks. OU hasn’t lost games because of bad QB play. It’s been the defense that’s been the biggest letdown.

Given the choice of letting Gray or Gabriel beat me I’m choosing Gabriel. I’ve watched almost all of OU’s games this year and he sails balls all the time. I’ve watched several times a receiver break wide open down the seam and Gabriel overthrow them by 10 yards, when a ball with a little air under it and the receiver walks in. I understand that goes both ways. Mims last week dropped a ball that was 6 if he just catches the ball. Defense is the biggest reason OU has lost 5 games. Gabriel is the next reason. Spencer is the better QB. He has 100 more rushing yards, 4 more rushing TDs, and has played about 1 game less than Gabriel with almost identical passing stats. Look at who has the better QBR.

Do you think it will really matter?

Yes. It certainly mattered against Iowa State. I haven’t heard your assessment of Gunnar or Rangel’s performance. No comment on their turnovers? No offensive remarks about their hair? I’m shocked!

Gabriel missed basically 2 games. Not sure where you’re getting Gabriel has played more. Sanders has thrown it 38 more times & completed only 58% of his passes. Gabriel has completed 63%. Yes, Sanders QBR is higher. He is the better player. I won’t argue that. But your original statement was that Gabriel was “not very good”. The stats prove your statement to be wrong. So do my eyes.

Sanders best quality is his ability to run the football. If you think Gabriel is the only QB playing on Sat that’s capable of throwing up a few air balls……then you haven’t watched as much as you say you have. I took the Cowboys to win 38-31 so I’m not knocking Sanders. But for you to throw shade at a guy who’s statistically basically identical to Sanders……is off base

OSU is absolutely a rival. It’s not on the level of OU-TX for any Sooner fans, but it’s definitely a rivalry. Here’s what you’ll get when asking OU fans about Bedlam. The older guys say it’s not. Anyone 40 or younger says it is. That’s a game every year that is a dogfight. It will never have the shine or history that OU-TX does, but if someone says it’s not a rivalry……they’re an idiot.

I think Gabriel is a nice qb. I stated he wouldnt do what he did in acc. His ranting and pass yard per throw or completion are lower. Him and jt both brought more hype then actual play.

Second it really doesn’t matter who sell the ticket higher. If osu ticket sell higher then it means its a real game.

I was fine with the turnovers. At least they are getting playing time. But, they did just as good as Sanders did in the Big 12 Championship last year after being the starter for multiple years. The season is over anyway so let’s sit Sanders the rest of the year and pray he hits the portal. I don’t want him to pass Weeden. And no way he is going to the NFL.

Of course hed have lesser numbers/impact than what he did with UCF. Hes playing much better competition and hes coming off a long layoff. That was an easy one. Again, im not aguing anything other than the statement made by @patrick2 that Gabriel has been “not very good”. Thats just not the case. Hes statistically been on par with Sanders. Thats just a fact.

I dont know what youre trying to say on the ticket stuff. He made it sound like OU was pumping this game by changing/upping a price. Thats just not true. I know Bedlam is big…i find it pretty funny that a few months ago some of you OSU fans were arguing that the game isnt a big deal and therefore no one cares if its lost…and now that its here…its a big game again. It IS A RIVALRY, regardless of the record. OSU IS A GREAT PROGRAM, that OU respects. Anyone saying otherwise is ignorant.

Its obvious that both qb are important to there teams. Osu offense definitely goes thur sanders. I dnt know what ou was doing when Gabriel was gone.

Lot to unpack here. Gabriel missed all Texas game. Spencer missed all Kansas game. Gabriel left TCU game with about 9 minutes left in second quarter. Spencer entered the Iowa State game for basically the 4th quarter. So with just this information, Sanders has been off the field slightly more than Gabriel. Then for Sanders add the time he missed in the Kansas State game and the Arkansas Pine Bluff game and I would say Gabriel has played roughly 3 more quarters. Not all that significant. Your example of completions/attempts/% is probably a better way to analyze. The QBR that I mentioned is probably even a better way to analyze. Gabriel plays on a team with respectable running game. OSU has struggled all year to run the football. How does that factor into that completion percentage? Does Spencer miss throws, yes. Does he sail balls when receivers are WIDE open? I haven’t been seeing that this year. I’ve watched Gabriel do it definitely more than once. Heck, RG3 spent time during the broadcast breaking down why he is sailing throws. Point taken on the standard Gabriel is playing behind (Baker, Kyler, Jalen, Williams, and even going further back). Gabriel is not very good by Oklahoma football qb standards. Going into Bedlam weekend that’s what I’m referring to, because his playmaking ability doesn’t worry me. Now I’m not saying I’m confident OSU wins. Wouldn’t be shocked if either team wins. I think Spencer can go win you a game and I don’t see that as much in Gabriel. Gabriel doesn’t pass my eye test.

I don’t see my ticket information as being incorrect. I was talking secondary market. It might be a bad analogy to show why this game means more to OU then they care to admit, but I stand behind ticket prices being way higher than other big 12 games on the secondary market. I actually bought my tickets through OU, but I didn’t price other big 12 games. Do you have that information? Could you pick the same seat for each big 12 game and provide prices? Now I’m curious. OU has a lot of idiot fans (I understand all fan bases do) because it shouldn’t take you long online to find Sooner fans saying 90-19-7 is not a rivalry. I also hear this from many Sooner fans I interact with both older than 40 and younger than 40.

This clip below was last year before OSU beat OU.

There are a lot of ignorant OU fans that don’t understand the history of the rivalry and its roots. I see and hear comments all the time from OU fans asking if it’s really a rivalry. 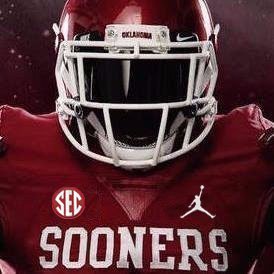 Vs Texas it was the defense plus no backup QB. Same for us vs Kansas and Kansas State.