Take care of business against Baylor and then root hard for Georgia, Houston, and Iowa.

I think best case scenario is Georgia beats Bama, then if the committee will put us in over Notre Dame, which if we beat Baylor they should, you could be looking at 1. Georgia, 2. Michigan, 3.OkState, 4.Cincinnati. That would be a very intriguing matchup between us and Michigan.

Would be quite a statement for the new-look Big 12 to have two teams in playoffs!

Where does Texas play its bowl game?

Personal we should jump noter dame this week. They have been living on their loss to cincy long enough. Their only win is Wisconsin which will be a top 25 win. The big 12 was told it need 13 points, did noter dame not get the same memo.
We beat 3 top 25 teams in a row just beat a top 10, beaten Baylor who beat the pac 12 champ byu. Personal we should be 3rd this Tuesday.
It will be nice not having Alabama tosu, ou and Clemson in the playoff

Congrats to the Cowboys. We (OU) didn’t deserve to play next week. Aranda & Gundy have easily done the best job in the Conf this year. The officiating was bad last night, but the best team won. Once Knowles went into playing coverage the 2nd half……it was over. Lincoln won’t stick with the run & Willams won’t just take what they give you. If you guys get in as the 3, you can absolutely beat Michigan. If you get in as the 4…….no chance. I said it……the OSU defense is good. It’s the best in this Conf. But……it’s not elite. You guys are tough. Play hard. Deserve to be in Arlington.

Not a single grouping should be proud or justifying their performance in Bedlam. Neither offense, neither defense, neither special teams nor the officials performed without major exception. While I am quite happy to be in the Big 12 championship game, I have taken more pride in some losses than I have in several wins from this season. From Missouri State to Boise State and now Bedlam, we did not play well, and emerged with victories only because of effort and happenstance. I saw complete effort versus WVU… and if that team doesn’t show up for the CFP, assuming a win in Arlington, it will be a more bitter than sweet accomplishment.

I do appreciate your gracious comments as a Sooner fan. A win is a win, but this was one ugly win.

OU fans are so obnoxious. Blaming the refs and poking fun at us for getting pumped about the win. This was more than a yes we beat OU. One game closer to big 12 championship, then hopefully CFP. What’s OU got in their future? Besides never making CFP when they get to SEC

I think the complaining about the call at the end is comical. The refs were awful all game what did they expect? Plenty of stupid flags thrown and plenty of ones that should’ve been thrown. Kicking sanders in the nuts when he’s down clear as day and then complaining about them picking up the roughness flag later like come on. OU is the beneficiary of reffuckery far too often. The one time it doesn’t go their way they lose their minds.

Ur rite they could be like osu fans and blaming gundy for not not winning.

Yes that roughing the kicker call was certainly bad.

@bkm That’s roughing the kicker every day chief. If you take out the plant leg, which the OSU player did……it’s automatic (by rule) every time.

I agree with what you said but the replay I saw on the big screen, he was not touched. The reaction after the replay and from Gundy supports what I think I saw.

@bkm So you agree that if you hit/take out the plant leg, that it’s roughing the kicker. 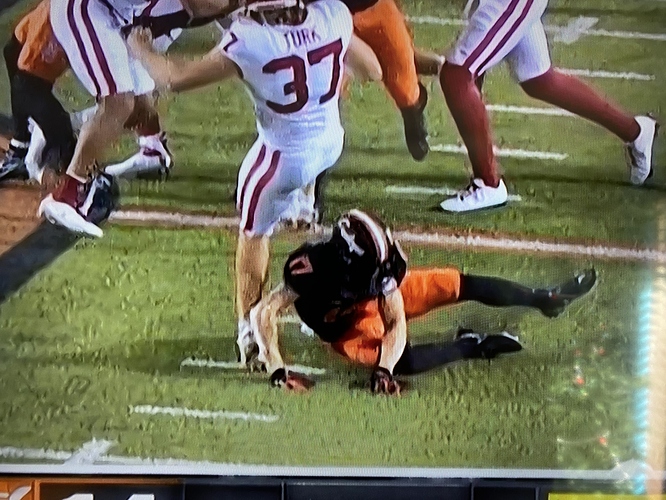 I’m definitely not saying that OU lost because of the officials. Not at all. The two calls that I hated were the one where they throw the flag for what was going to be unsportsmanlike conduct & an OU 1st down……& the pick it up. I hate those. If you throw a flag for something like that, you obviously saw it. Then you say “nah I changed my mind”. I hate those. The other call was the no-call on what I felt like was Pass Interference on the last drive.

BUT AGAIN, OSU IS/WAS the better team. The officiating did not cost OU the game. Their poor offense in the 2nd half did.

Absolutely. It did not look like he hit the leg from the angle I observed. It appeared to be a flop.