About Football (and Other Stuff)

Not to go full “they won the championship of life” on you here, but I got a letter from a reader recently and I wanted to share. Like, an actual letter (which obviously I loved). Maybe you all won’t find it compelling, but I did think it was a good angle that we don’t think about when we think and talk about Better Recruiting Propositions. 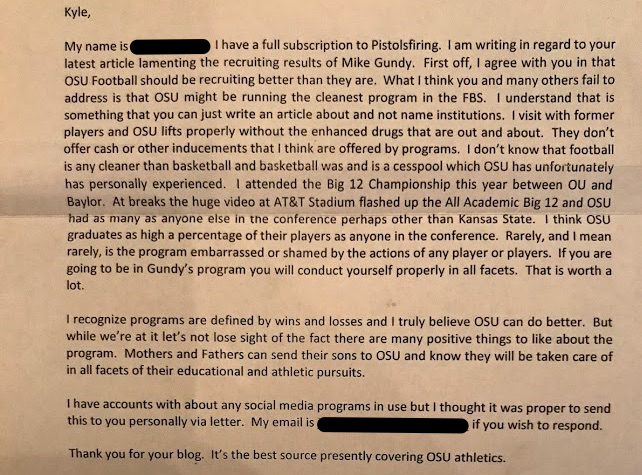 Man, things like this make my day. Humanity really isn’t all that bad.

I admit that I don’t pay as much attention to the other teams in the conference but I don’t hear about a lot of problems at Kansas, K State, Iowa State or West Virginia . I thought the Tyreke Hill thing was handled right but wonder if Blackmon first tried drugs after he left OSU or Joseph Randle’s obsession with stealing underwear all started in the NFL?

I have never heard that about Joseph Randle, LMAO.

It’s easy to clamor for CCs and NCs and want to make a statement in football. Every college worth a sniff does, but the program being what it is, a vessel for these player getting degrees, makes the whole thing worthwhile IMO. I want them to do well on the field, but even better beyond their collegiate days; most of our players won’t move on to the professional level. It’s a solid program when you stack it against the rest of the conference, no two ways about it.

This is spot on. Keep getting upset and saying you want Gundy to “play the game” and not pull offers. Look how much those kids end up being problems. He has created an amazing environment. These are the facts, and they are undisputed.

Yes as much as we want these things NOW they are fleeting. Education can’t be taken away, reputations can.
We want a national championship and Gundy might have thrown the kitchen sink at 2011 and then realized how hard that was and how much harder bias and tradition are to overcome . He might now be playing the long game of building a SOLID foundation for our program to clean up the reputation of the 80s and more recently the SI setback that , while unfounded, did serve as something for other coaches to point at during the investigation to young, impressionable recruits .

But the SI article doesn’t have much of an effect now. If opposing coaches are using that, they are stupidly pathetic.

You’re right, not now but during the time of the investigation that throws a wrench in the 1-3 year process of recruiting an individual . Putting that much work into it and then running into a brick wall would definitely take the wind out of your sails .

Gundy turned the rant into a positive in recruiting, but can’t do the same thing with an SI article that was a nothing burger. Gundy was right to publicly claim the SI article proved he probably runs one of the cleanest programs in the country.

You’re right but the article jenni Carlson published was a one time thing with no lead up . The SI article was months in the making and was published one piece at a time .
So that’s not necessarily apples to oranges .
It’s a sprint versus a marathon .
And he was right to claim that but the damage wasn’t in the article the damage was in the setback in recruiting . It put an ounce of doubt into young impressionable minds and that can run wild .
I think it was Mussolini that said something like “you can’t tell people what to think,
But you can tell them what to think about “
So think about leaving your latent for the first time to potentially go down a rocky road that’s twice as far away from your parents as (insert Texas school) is .