Anyone know if this dude is accurate or not?

Sounds good to me!

Just saw this exact thing. He isn’t the only reporting this now.

Who else is saying it? Don’t get my hopes up

Holy good lord please keep me safe in these uncertain times!!! I may not be able to contain myself if this has any truth to it… #natty2020 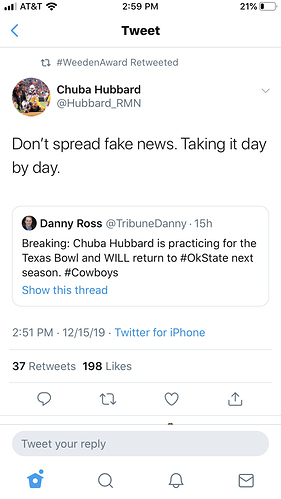 Tim Shepard just tweeted he heard Chuba is coming back. Any word?

He said he will announce in less than two weeks.

I don’t feel great about it after this game, but we’ll see.

I saw Spencer Sanders retweet this

Looks like he only liked it, didn’t retweet it…?

Look at the top of the screenshot

I can’t remember our players taking such exception to what is said about them by yahoos on the Twittersphere before. Isn’t that stuff usually just ignored? Who cares what Tim thinks?

I actually went to the Tweet itself to find it and it was not a retweet by Spencer Sanders when I looked at it. Was is only him at the very bottom of the 14 or so likes when I saw that he just liked the tweet not retweeted it…?

I saw him retweet it. But I’m betting he undid it now

Chuba was fun to watch last night, but I thought there were 2-3 plays when he looked like he was trying to avoid a hit/potential injury – including our last scoring drive when he basically did the QB slide after a 12-yard gain.

To me, it looked like a really good player avoiding disaster before the upcoming NFL combine.

He also seemed like he wasn’t 100% on the top end. There were certain runs where I thought he would have broke away for the TD but never did. He was run out of bounds on two or three well down the field when normally he gets the corner and is ‘gone’.

He did that to stop the clock. It was a smart play.

Weird stat quirk: Chuba ended up with more yards than Spencer Sanders. Has that been done since 88?