Anybody been seeing the manslaughter conviction on desean brown? If so is it true?

Have u seen it?

If this is true I fully believe this was kept way under wraps since Gundy doesn’t tolerate this chit. No shot Gundy signs him knowing this. Guess we wait and see if it’s true or not.

I can only find it on reddit and could not get to their likes of court cases.
But I got no hits on the kid who got killed.
The uncle was supposed to have been on the animal 2 weeks ago.
He is supposed to have hit the kid while going 104 miles in her. It happened a year and a half ago. So either way I dnt see gundy kicking the kid of. A bad reckless drive deal is completely different then rape or assault robbery by adults.
Not down playing it. But there is a reason minor files are sealed.

I agree, the supposed aunt is on Twitter calling out Gundy. Saying he changed his name to keep it under wraps and lied to coaches. Seems suspicious to me

Here is an article just posted by The Oklahoman with many more details of the situation. 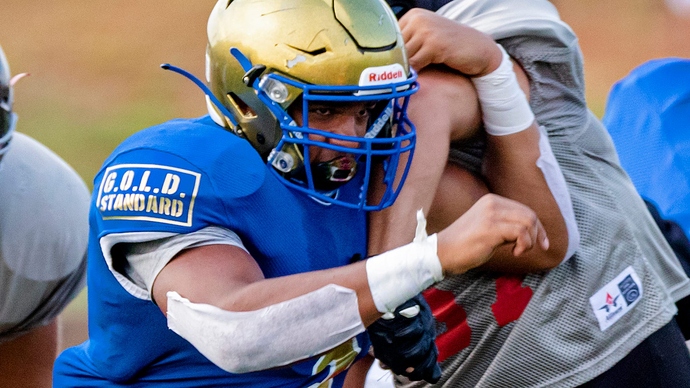 DeSean Brown of Choctaw pleaded no contest to involuntary manslaughter after...

Very surprising to be honest. One of the things Gundy does well is not tolerate bullshit from players. He’s good at making sure their character is right.

The article states he hit a pedestrian who was in the middle of the street while speeding. Not drinking, no drugs, didn’t say about if at traffic signal. He was a minor and will go through probation until it can be expunged when he’s 19.

Sounds like a really unfortunate incident, but not a deal ender or indicative of his character. Good thing is he’s close enough to take care of the legal stuff since he’s in-state.

Hope he gets a second chance.

How many kids speed while they are young? Does that mean they don’t have good character?

I’ve done some dumb shiit and I have the tickets to show for it but I mostly kept speeds like that to the highway. Good chance he’s a good kid but ■■■■ a death on his hands is a hard one to deal with.

So u would have been really surprised to come up quickly on a hitch hiker of a biker.
It was a bad deal. I can say when a young kid is driving that fast, plus with the person on the bike, it’s hard to say what went wrong.
Even at a lot slow speeds, when u come up to something in the middle of the road u have to stop. U dnt know what a deer squirrel rabbit deer or human will do. I have know plenty of people who took out there car over a back tracking rabbit.

A highway is a bit different than around town. Neither are smart but one has a reasonable expectation there will be people around and one doesn’t. It’s unfortunate all around through.

Well was it downtown. We dnt know how crowded it was. I’m not sticking up for the kid. I’m just saying it’s a sad event more could have happen and lucky it doesn’t.

I don’t really know what would be the best way to handle this situation, but Oklahoma State is giving him a chance I just hope he uses it wisely

Was he driving 90 ? On a city street ? That just sounds bad . Was the biker within their rights ?

Saban would say something along the lines of “are you not supposed to give young men second chances?”

Article someone posted said the relative location. Looks like it’s 2 lanes each way with neighborhoods on each side.

From the time of the accident, it appears to have been dark when it happened. The article also makes it sound like the bicyclist was literally in the middle of two southbound lanes, so not where he should’ve been. I highly doubt the bicycle had a light for night riding. Even if he hadn’t been speeding, I don’t see how the accident could’ve been avoided, but the speed is definitely what was obviously a huge reason for the accident and death. At that time of day, though, there was no reason for any driver to expect a bicycle to be on, or in the middle of, the road.

The uncle of the kid who was killed is on poke report. I do feel for the family. He is want an eye for an eye deal
It is very unfortunate.

The aunt of the kid who was killed has been all over Twitter as well. She’s been calling DeSean a murderer and wants him to have no second chance. The thing that stinks is if he hadn’t been speeding, there’s not much they could say at all.