There are 5 of those teams that need help just in getting to the playoffs.
I not saying we can get in with 1 lose. Only if ou is undefeated and we win the title game.

I would like our odds better if we could be better than 9th in scoring in the Big 12.

We r not wasting scores. Look at Texas out scoring tech by 35 points. They only needed 36. That’s just a waste.

Can we just worry about getting better each week and taking it 1 game at a time. This team right now shouldn’t be in any final four conversation.

oSu has historically played good on the road, and won its share of games. I see no reason to worry about road games this year, especially since we have owned Texas in Austin lately. Second, consider the 2000 uO MNC season, and Big Game Bob’s second year in Norman. Man Breasts had ruined uO’s reputation as a serious threat to winning an MNC, and uO started the season ranked in the bottom third of the Top 25. Each week, after each victory, they slowly started working their way to the top, even though Florida State was the unbeatable “Alabama” of the day. Of course we all know Heupel led uO to a 12-0 Big 12 record, and faced Florida St in the MNC game, and won. uO’s defense, led by Torrance Marshall, was given credit that year for winning the Big 12 and the MNC game. So I say all of that to make the point, that if oSu goes undefeated this year (we have the defense to do it) there is no reason they can’t win the national playoff series. No need to doubt them today. Just let the games play out on the field, then talk about it. Don’t assume a loser’s attitude, because I can see the team does not have one, and they are getting better each week.

is no one else floored that Pittsburgh is up there? The unranked Pittsburgh that lost to Western Michigan?

No chance this team is going undefeated. I’ll give you the D has played well but we haven’t played anybody good as of yet. Texas has the best RB in the country, let’s hope we can keep him to a pedestrian number. If I felt the O could score more than 35, I would feel much better about Texas game. The weeks TX vs. OU should give me a better idea of what to expect.

Brian, we have played and beat two Top 25 ranked teams in a row. Texas will be our third ranked team, assuming they don’t get punked by uO. Either way, the win column is looking better and better each week. That’s why I say to Cowboys fans, don’t project negative results into the future with subjective thoughts and comments, just let the games playout on the field then comment objectively. Also, remember that college football players and teams improve every week of the season. Let’s see if Spencer improves enough to lead us to victory in Austin.

Ou had heuple that year not spencer giving free footballs out. Little different. But let’s see what happff we happens.

I will say Sanders will have to have a short memory. Coming off the Baylor game plus his last Texas game.
Texas defense is not as good as last year. We control there rb and qb they will not score 70.

OU has gone to underneath, short passes to nullify the opponent’s QB rush. That’s a tough formula for our Defense to stop.

Question: has our offense utilized a jet sweep yet this season? Are we holding it for the second half of the schedule?

(Just seems like so many of our running plays designed for between the tackles…we seem reluctant to stretch.)

about road games this year, especially since we have owned Texas in Austin lately. Second, consider the 2000 uO MNC season, and Big Game Bob’s second year in Norman. Man Breasts had ruined uO’s reputation as a serious threat to winning an MNC, and uO started the season ranked in the bottom third of the Top 25. Each week, after each victory, they slowly started working their way to the top, even though Florida State was the unbeatable “Alabama” of the day. Of course we all know Heupel led uO to 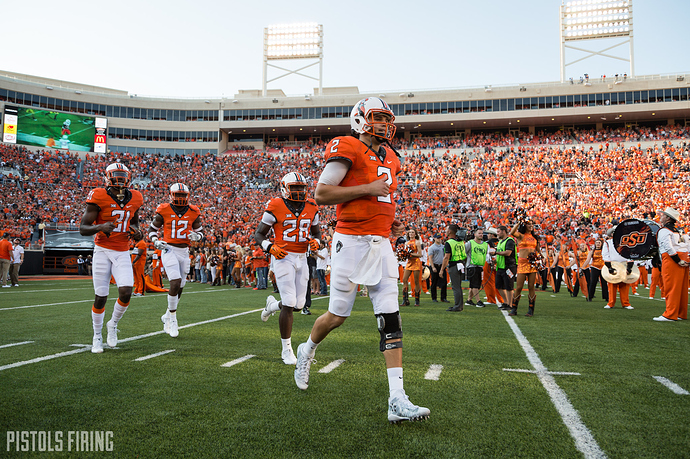 I take a look at some successful plays from the 2017 season.

We have done a couple with mixed results.
We did do a motion play with presley. He went one way then came back it got the defense in a bind

I wouldnt worry too much about our scoring rank. Part of how scoring works is how many points you need to score to win… meaning you play aggressive or less depending on what you are having to defend. Our defense so far is showing that we dont need to score 35-40 points to win… so all that the offense need to do is score around 20-25 to win. Now that may change with injuries racking up on the defense.

Another point to consider is that the offense has the capability to put up points at will. When they get a couple of injured receivers back, the offense will be more balanced. So there is upside to the offense that we could expect.

Current team is far from NC calibre. But perhaps capable of winning the Big12. No question. Just need to clean up a few issues on offense (penalties) and Sanders need to be consistent (Throw the darts but not to the other team) and that is it. Having a couple of receivers and Jackson back at RB will help with some depth pieces for Texas.

We thought we had the defense last year to win at OU. I guess we all seen the result from that one.

Ou doesn’t have tge drug squad coming to help. Thus is not the same defense. Yes ou could get better but last year better no.

The year UO won the national title they averaged 34 ppg and the defense held the opponents to 15 ppg.

Currently our OSU team averages 25 ppg and the defense 19 ppg. Your talking about nearly a two touchdown margin between a national championship team and the team we have right now.

This team isn’t going through the schedule unscathed. You also forget we have a coach that’s 2-14 against OU as well. He’s had enough trouble just beating them twice in almost two decades. I doubt we see him getting two wins against OU in the same season.

We don’t have a household name. If this team gets to the playoff it’s more than likely going to need to be 13-0. We couldn’t even do that with the best team in school history. I doubt that it’s going to happen with a QB that tends to throw more interceptions than touchdowns.