I’m covering golf but hate-watching OU/Baylor if anybody wants to join me.

I want to enjoy my weekend, not watch Hitler fight Stalin to see who gets to control Germany. Gonna drink and play video games instead.

The towel hype man who runs down the sideline for OU is atrocious. 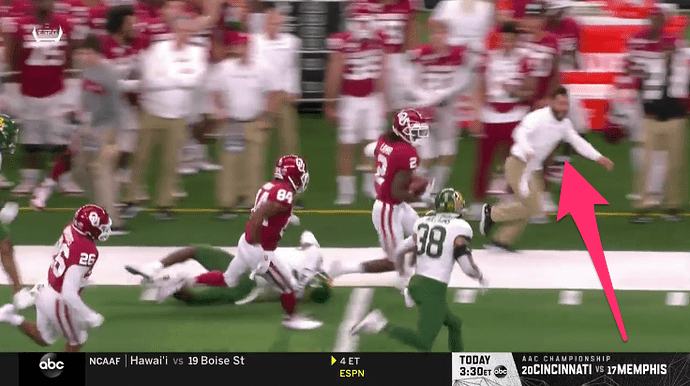 Man, someone could make a LOT of money if they could figure out how to mute that certain OU tune without muting all sound. Surely this science exists.

watching while at work

An OU loss will help with me having to work on Saturday.

Let’s be honest. The game isn’t REALLY going to start until after halftime, right?!

Kinda hilarious that OU is losing right now. No clue how.

To a BACKUP QB. If only it was last weekend

Figured there would be a hate thread going! Can’t figure out if OU is playing worse, Baylor playing better, or is OSU was that inferior this year.

Baylor in the playoff would be…interesting

Would be tough to see Baylor get in the playoff before OSU.

Such a smug demeanor right after the game

And yet he’s still only the 2nd most annoying QB they have had in the last 3 years.

Georgia beating LSU and keeping OU out would be tasty.

But the trade off is two SEC teams.

Meh. Better than getting trash talked at the Choctaw Bingo by the guy cleaning the bathroom.