A Brief History of No. 1 NBA Draft Picks in the NCAA Tournament

So, out of the 20 years under review, 5 of the top picks didn’t play CBB (15 remain). With these 15 in mind, let’s break it down further and assign a point value to each level of progression, starting with a -1 for not making the tournament (as I see that as a huge knock and argue it should be more punitive but I am trying to be objective) and then cycle up to winning the tournament as a 6.

Based on this approach, the average of all the players eligible (those who played in college), is a 2.133, which is equivalent to losing in the Sweet 16. I am glad I was sitting down, specifically so I could add a grain of salt to the article. Will I be happy if we make to the second weekend? Yes. Will I view losing in the Sweet 16 as a failure? Probably not, but that depends on the game and opponent. According to the data, it seems to me having a #1 pick on your roster is not transitive for reaching deep into the tourny. 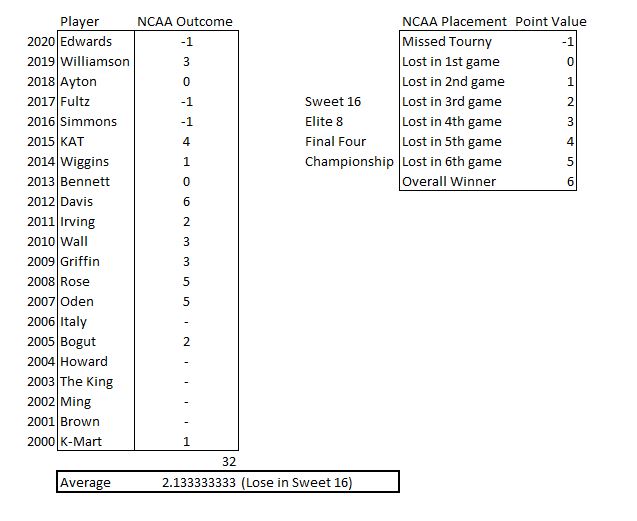 Man there have been some crappy #1 picks!!!

One thing that is and would be hard to track is the supporting cast they had. I can pretty safely say although Cade has a young supporting cast, he has a very talented group on the floor with him. This was evident when they played WVU with him and Ice sitting out.
It would cause an outrage from the college ranks all over if the NCAA announced a late announcement on a ban for oSu.

Good points in your comments.
A couple of things. There are actually 21 picks on this list and counting last year’s pick Edwards as not making the tournament isn’t fair as no one made the tournament because of COVID. Should be 33/16 = 2.06, which is about the same.

I feel like this statistical layout was built up much more then the outcomes justified… I’m not saying that most of the Oklahoma State faithful wouldn’t be more than happy with a Sweet 16 matchup, win or lose… Provided how star driven basketball tends to be however, especially at the next level, I would have expected consistently deep runs for the programs these athletes represented. I’m actually shocked at the number of team who failed to reach the tournament altogether, and still managed to garner a No.1 overall selection for the player in question!. I more than understand how important supporting casts are, but after being told to “sit down” prior to reading the outcome of some 20 post season runs, I would have thought we were all but staring down a guaranteed run at the elite 8 or better… In any case, we all know how consistently inconsistent our boys in orange have been over the years, meaning that i’d give us as good a chance as any to make a play for it all… just as easily as I could see us fall to a double digit seed in the first round!

Another less exciting conclusion you can pull out of this is just that Duke and Kentucky are historically dominant programs that draw top talent and outperform most other teams. I know this is a pretty revolutionary idea. If you consider Sweet 16 or better a “good” outcome, and anything less as a “bad” outcome, you end up with nine good outcomes, seven bad outcomes, and five guys who didn’t play college ball. Kentucky and Duke are responsible for five of the good outcomes. If you pull those out and don’t count the non-college guys, there are more bad outcomes than good.