(come on guys, they helped us get Travis Ford outta town) OSU Bullets • I’m way into the realignment thoughts for the Big 12 but found this particular idea about where OSU and OU could end up interesting. Oklahoma folk commonly state that the Big 10 is the most likely future for the Sooners. Presumably the league would add Oklahoma State as well and bump Purdue over to the east division. Then Oklahoma would regularly play Bedlam, the Red River Shootout, Iowa, Wisconsin, and Nebraska with occasional pulls of Michigan, Ohio State, or Penn State. I don’t know what happens to Texas in this scenario but they could probably push their way in just about anywhere. [Concerning Sports] OSU -> B10 hasn’t been a place my mind has gone. Two thoughts: How would you feel about new division rival Illinois coming to town with head…

Random observation: I was looking at the photos from NewsOK.com of OSU’s first spring practice. Illingsworth apparently doesn’t grip the laces on the ball…I don’t like it. 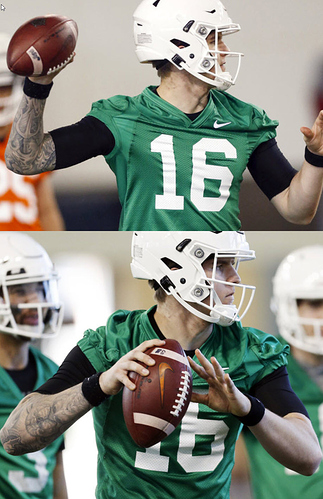 Nice tribute to Coach Chesbro (RIP), who was a very nice, classy person. I had a graphics class and decided for one of my projects to make an oSu wrestling poster with the schedule of duals and so forth as well as a couple of photos of the wrestlers. Then went to the wrestling offices to see if they would trade me for something and got a couple of T-shirts and a pair of shorts. Lee Roy was one of his assistants at the time. He thought the poster I made was really good.

RE realignment all the Big 12 needs to do is highly encourage UT to move to the SEC or better yet, which will take some negotiation skills, trade Arkansas for them. Then all we gotta do is pick up two more teams to get back to 12, it’s not impossible. I’d suggest Central and South Florida but geographically that’s not going to be the best course of action. Big 12 screwed up when they selected West Va over Louisville, which would be a much better fit, but here again, why not ask the ACC to trade those two programs?

Then maybe the two FLA schools works a bit better…thoughts?

You’d be surprised at how many QBs do it like that. I think it’s odd too but if he throws nice, tight spirals I don’t care if they holds the tip of the ball like Terry Bradshaw used to do. Looks like he’s got a big hand and long fingers, but I don’t wanna go there, talkin’ 'bout small hands on a QB, leave that for NFL know-it-all types.