Much Respect to Spencer Sanders 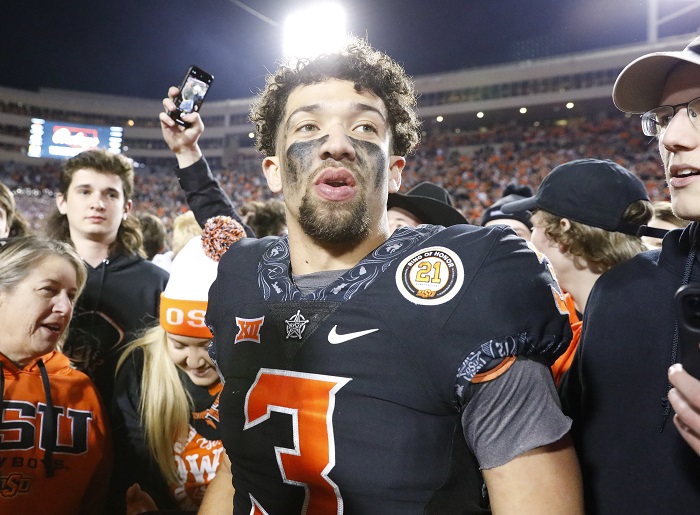 Oklahoma State quarterback Spencer Sanders helped lead the Cowboys to one of their biggest wins in school history last weekend, with a 37-33 victory over the Oklahoma Sooners. That win ensured that they would play Baylor for the Big 12 Championship...

Thats why Spencer in a natural fit for cowboy culture.
Great story.

Spencer has been nothing but class since he’s been here. He’s taken lots of criticism but he’s held tough and tried his best through it all. This is just another fact of the type of young man he is, plus he’s turning into a reality good QB. Class individual, that’s what’s the Cowboy Way

Spencer has been phenomenal this season. His arm strength and athleticism were there from day 1. But Ive been so impressed w/ his decision making this season. Fewer turnovers, avoiding the pass rush, and debuted for the Bedlam game I guess, he’s figuring out the right read on option/RPO stuff. Michael and Robert, you guys are right on the money about Spencer. I can remember at times last year I was critical of his mistakes, but man he’s improved so much!

To add to what I said, yes, he’s very much a class-act. And never been an off-the-field issue. Even if he never plays a down in the NFL, he’s gonna be successful in life. Gotta love the Bedlam trash talk too.

Exactly right regardless of his nfl future he’ll be successful. Stand up kid that works his tail off

I don’t know if Ratty is the reason he’s improved so much but i take it. He’s making nice plays, a few turnovers trying to squeeze it in tight places. But you can’t win with a timid QB. Think he throws as good on the run as in the pocket. Great kid, we need a lot more like him. Let’s hope for a turnover free day Saturday !!!
Go Pokes !!!