NFL brings down the hammer on Garrett, suspends three.

Myles Garrett is a typical NFL criminal. The man is extremely lucky he is an amazing athlete because his brain would’ve led him in and out of prison his entire life. Hopefully the NFL doesn’t just suspend him the rest of the season. He deserves a bigger punishment than that.

Listen, I totally agree this was an incredibly cheap move and absolutely worthy of suspensions and fines - bring it all! But, the whole “prison” comment…too far! By most accounts I’ve seen, this was pretty out of character from this idiot too. Like I said, I totally agree with the harshest possible punishment, but I just think the “in and out of prison his whole life” is pretty harsh.

Do you apply that same thinking to Ron Artest?

A punch to the face would’ve been out of character. And possibly well deserved by Rudolph but beating someone over the head with a weapon. That’s a criminal.

Side note: the comments on the articles look so good! Great work. and if you click on the orange username of the first comment, it brings you straight to the forum discussion. 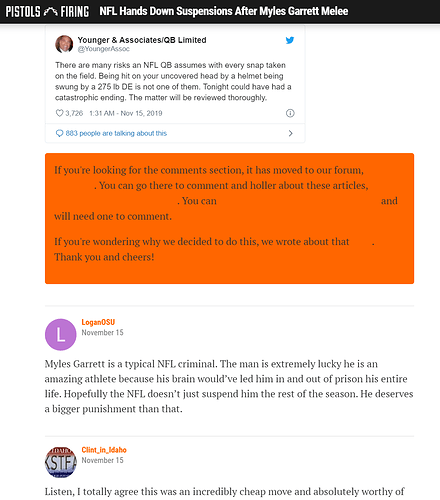 Many prisoners today wondering what was different between their assault conviction and what MG did.

Now, you may be right about that…

That’s his real name, not some bs a judge granted him because he’s an attention wh0re.

Wh0re is a forbidden word…? C’mon…

Hopefully he goes to jail too.

His legal name is Metta World Peace though

I think there’s alot of apologizing for Mason here. Finger stuck and trying to get it out? I mean…

He probably went after him, but…who cares? NFL players are feisty competitors. Bottom line is, who cares what he did? If it was a QB who was well respected, and not a 1st year starter struggling, then he was ‘just being a competitor.’ Favre, Cam, any respected QB with swagger.

We don’t need to paint Mason as an innocent victim here. We don’t need him to be a saint in order to state that what Garrett did was heinous, over the line, and worthy of the biggest suspension in NFL history.

I can tend to agree with you on this, but the in and out of prison his whole life comment, and pretending to ‘know his brain’ because of one thing you saw in a football game? That’s too broad a brush and we need to be better than this. Let’s comment on the action and not stereotype a person.

Rook, to piggyback on your comment, I encountered a stereotyping comment a few weeks ago on a PFB article (when the comments were still open). This was from when the Watson news broke:

"First off who here has read the court records before offering your opinion on this young man? People file PO’s all the time. 90% of the time they get dropped…so I’ll wait for the details to emerge before judging.

As far as a “trend”? How many of those players that Boynton kicked off were his recruits? Every situation is unique. The inconvenient truth is that more than half of these young men likely grew up without a father in the home and are figuring their own way through life. Going to college and staying busy with sports and academics keeps most of them too busy to get in trouble but they are human and will make mistakes.

Apparently 1/3 of Les Miles’ roster was a bunch of knuckleheads but we didn’t mind as long as we won some Bedlam games.

I disagree that Boynton hasn’t earned the benefit of the doubt. First off Holder wouldnt have given him the time of day if he wasn’t of high character and I believe he is an excellent role model for these young men. Only time will tell but Im not even a bit concerned about Boynton and I too was on the Doug Train."

For those of you who can’t tell what part of that comment I have a problem with, here ya go!: “The inconvenient truth is that more than half of these young men likely grew up without a father in the home and are figuring their own way through life.”

Now, pray tell, which players might this “Jeff” be speaking about, specifically? And where does he get his 50% number from?

I called him out for being borderline racist…and he told me to look up Candace Owens. She of “Hitler wasn’t that bad!” infamy.

You’re not being tackled to the ground and kicked in the groin while be pushed by a couple of offensive linemen. Yes, it was a boneheaded decision in a high tension situation but that doesn’t mean someone needs to take this situation and jump to “typical NFL criminal” and “wouldve led him in and out of prison”

Mason didn’t do anything remotely worth an apology to that guy.

Yeah he got kicked after he threw the helmet at their QBs head. I fully approve of it it too.