Washington is productive… if you throw him the ball.

Great job Matt.
What happen to flowers.
Mite start put up corndogs stats
Do we only have 4 players playing.

Glad to see Washington is finally being used.

Big Ben calls the shots for the Steelers. He doesn’t like or have much confidence in Washington. I’m ready for Ben to retire.

I think the only way Big Ben retires is if he has a serious enough injury. Would be better if they traded Washington so he can find a team that will use him. Our former QB should also go elsewhere to find a place to play.

Washington would do really well with a new setting. I don’t think the same for Mason. He is what he is: career backup. And honestly, for as much hype as we put on him coming into the NFL and with the stats he put up at OSU, he’s almost a bust. If he stays in Pittsburgh another couple of years, they’ll eventually draft someone they think is better, and waive him.

This is par for u. I bet u thought weeden would have been a good nfi qb too. Love them both glad they made big money, but neither are mobile enough. Mason may make something happen for a year or 2 . I doubt it.

Did u see how woods helped win a game for Virginia by having no catches.

Did you see how he already had more catches, receiving yards, and touchdowns through his first four games at Virginia than he did at OSU all last season?

This is par for u. I bet u thought weeden would have been a good nfi qb too

Weeden was at least a 1st round pick.

No I missed that

I said I was happy for him. And laugh at the browns the whole week.

Did u see how woods helped win a game for Virginia by having no catches.

Did you also happen to see he wasn’t playing because of an injury? 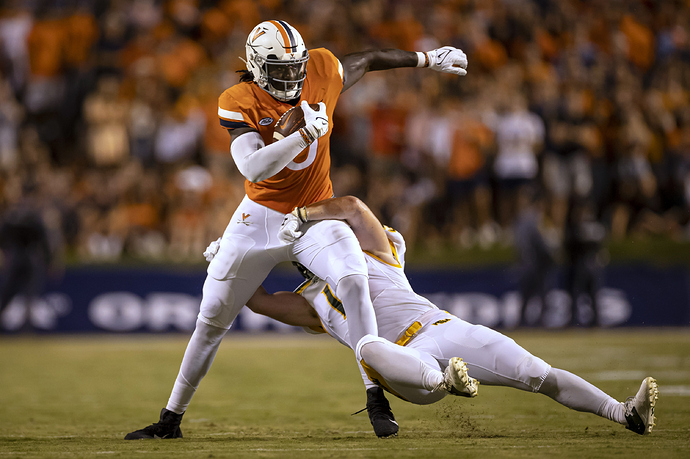 Virginia will be without star tight end Jelani Woods who has 16 receptions for 247 yards and three touchdowns when they play at the Miami football team o...

Of course you didn’t.

Give Weeden the exact same career arch starting at 18 and not 24. Then let any team other than the Browns draft him, and he is probably still playing.

The Browns are where QB careers go to die. Everyone knows this.

He played for Dallas. I’m not sure he would have been the same qb at 18. He showed his maturity.

Is it just me or shouldn’t the Steelers sit Roethlisberger and work out an announcement that he is retiring, then put Rudolph in as the starter so he can revive the Rudolph to Washington big play? With Big Ben still in the room, even sitting on the bench, he is like an elephant in the room and takes up all the oxygen. Without anyone looking over his shoulder, I think Mason would do a great job, and Washington would get his fair share of targets, as the Steelers stretch the field, which they currently can’t do with Big Ben.

I think I’ve accepted that Mason isn’t the answer in Pittsburgh with or without Big Ben.