Spitballing here, tell me if I’m wrong with this 1st part: Aggies are REALLY ticked off at the premise of UT & OU coming to move in next door, as the divorce happened a decade ago and they’re pissed they’ve bought the mansions next door in your posh SEC neighborhood.

IF, behind closed doors , Yormark could get the 6 PAC 12 teams in (AZ, ASU, Utah, CO, Oregon & Washington), talk to A&M and Arkansas, MAYBE LSU, and Nebraska and/or Iowa, to create a middle-of-the-country superconference, and take that group to the TV execs for a deal that rivals SEC and B1G $$$ …

Would the Aggies (would be the top dog likely talent-wise, winning is another thing) leave the SEC?

Is it even possible given GOR or any other contracts?

It sound good, but logic has gone out a long time ago.
Say we could get a&m noter dame Nebraska Oregon Washington utah. Without those bs teams. We may get to 60 million a team. And more teams could play for title.

All sounds great. I think they all think its going to a super league and want to be in at the beginning.

Memphis over Washington lol I’m gunning for them

The Aggies have got to be pissed and they have a killer class coming in this year too . Things could get interesting . Nebraska can come back anytime

I like the ambition but schools from the Big 10 and SEC won’t leave when they stand to make 80-100 million a year over the potential of what you’re proposing. Just my two cents.

Exactly…which is why I put in the caveat that it would be $$ similar to the B1G and SEC.

If that were the case…then what say you?

It’s swinging for the fences.

Isn’t FOX sports wanting to get more involved in the tv contracts ? From what I’ve heard they are. FOX is more solvent in money than ESPN , the later was having huge money problems last I read
That would be a great conference if it were to happen but doubt you could get all on board

I heard fox is just going to stick with big 10. Heard cbs and nbc could go after us

Does CBS and NBC have enough outlets to broadcast that many games. NBC has the contract with Noter Dame so that takes a slot up ?

Nbc has peacock also. It was said to be maybe a joint deal

Yes, some of the west coast stuff would be tough time zone wise. Yes, it’s probably impossible to pull so many SEC teams away from that much money. Buuut…we all agree that football is what’s driving this money-train, right? Well, football-wise I think this is a fairly decent geographically-friendly set-up. Competitively balanced. Takes up a large swath of the nation’s viewership. Gets you most of the markets you want/need. Best of all, not a single f—in’ blue blood in the bunch. Restores some old rivalries. Creates a few new ones. Best of all, Pokes prove once and for all that we don’t need Bedlam to run a conference. Thoughts?

If you could guarantee that the money is right, I’m sure some of the schools you mentioned would be tempted.

Couldn’t A&M, Oregon, Nebraska, LSU, Clemson/Florida State be considered a “blue blood”?
I think it’s an interesting line up. As for the distance factor, you could use a pod system to help with that:
East: Clemson (or Florida St), Georgia Tech, LSU, Ole Miss
North: Iowa, Kansas St, Missouri, Nebraska
South: Arkansas, Oklahoma St, TCU, Texas A&M
West: BYU, Colorado, Oregon, Utah
You’d play the three teams in your pod and 2 teams from each of the three remaining pods, one being a home game. Top 2 teams advance to the CCG.

Saw this article a few days ago and I would actually like to see something like this. It’s not perfect but a heck a lot better than what’s going on right now. 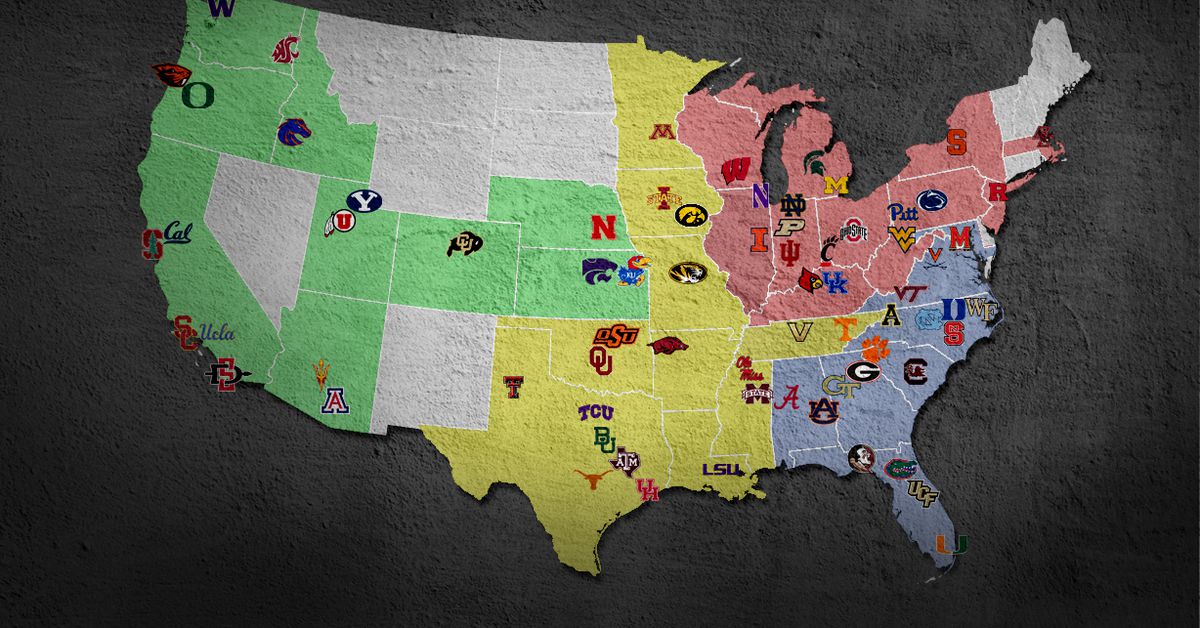 THE POWER FOUR: Starting from scratch on conference realignment

Clemson and LSU are what I call “new money”. Nebraska stopped being a blue blood when they fired Solich. A&M won their only Natty in like 1938. Oregon has never done it. FSU had the Bowden era and Jimbo’s one Natty w/ Famous Jameis. The true blue bloods are ND, Bama, Ohio State and Goon. That’s it. All that to say…I tried REALLY HARD to keep any historically dominant programs out of it.

Two of your true BB haven’t won a championship in over 20 years. I guess if you’re in the hunt every year you’re still considered a BB ?

Your take is a lil off. Whats new money bothe lsu and clemson has natty’s from like the 50’s

Maybe I should remove ND. Haha!

They say they are the most revered school ever in football. I think Holtz was the last coach for them winning a natty, Stoops won one in ‘01 ? So it’s been awhile since either one has won one

Thanks for the correction…so maybe Ohio state and Alabama are the only two?! That seems crazy to write. Men’s hoops has Duke,UNC, Kentucky, and Kansas.