You know its a QBs award when

In all seriousness what do y’all think chuba has to do to bring it home, I think the only way the trophy makes it back to Stillwater is if chuba reaches Barry level of output. 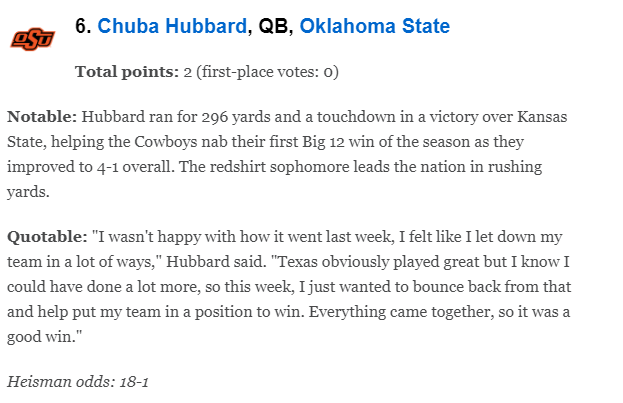 I honestly think he would need a Barry like season and beating OU to win it.

We would have to at least make it to the sugar bowl. Which means be part of the conference championship game. Then Chuba would need 2k.

Chuba is fighting against the QB argument and the wins column argument. I remember discussion a few years ago about Heisman’s that rarely come from a team outside the Top 5 final rankings and recently they’re nearly all QBs. All of which are out of his control.

Very true, and I think it might be harder than we think. Both Bryce Love and Jonathan Taylor rushed for over 2,100 yards in the last 2 years, and neither had a true shot at the Heisman over a QB.

If he gets another couple 300 yard games between Tech, WVU, and maybe OU it’d be pretty hard to ignore him as a serious candidate. He’d also be right around that 2k marker.

It’s just an award, and a criteria-fixed one at that, but it would do a lot for the program if Chuba’s Cinderella story came true.