The Cowboys missed two field goals and lost by 3.

Our passing game is pathetic. Purdy In the second half could throw the ball and make quick accurate throws to sustain drives and score points. We can’t do that.

I posted it already but I’m doing it again. 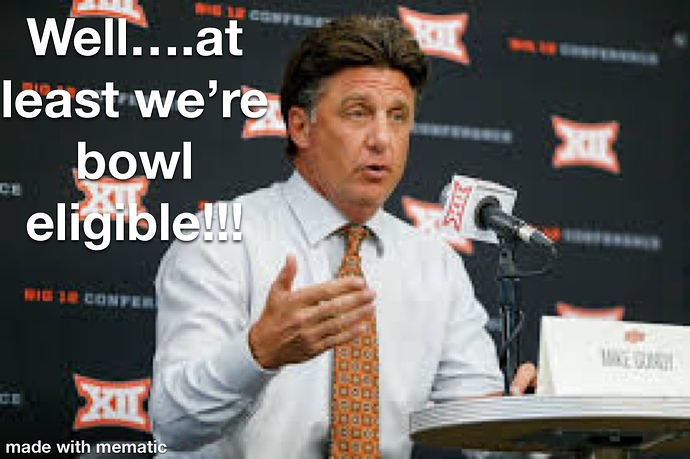 I guess we need to play against r defense

Yes where going to the liberty bowl

I’m not sure Gundy should had got that contract extension yet. I’m really questioning the run calling today going into this game knowing that we weren’t going to run effectively against Iowa St. The play that really gets me is the 4th and 2 to throw a screen! We have a RPO quarterback! Roll that man out to let him run for it or the option to throw it! I been sticking by Sanders all year, he can be clutch, but his strengths aren’t always used. Today he was pretty good.

I still don’t understand how the pass protection is still what it is, the kicking game problems, predictable run calls, and lack of guts to go for it on 4th down. I knew at one point this season it would get shutdown.

The kicking game won the Texas game for us and lost the ISU game. That’s what it boils down to, besides all the pass interference calls that kept the ISU drives alive and the very poor spot on fourth down. As an aside, OU will fall to either ISU or us, or to both, and the Big 12 will miss out on the 4-team MNC.

Sanders was 15-24 for three touchdowns and zero turnovers. He didn’t play too bad of a game besides the second to last offensive possession.

I can’t really pin this one on him. We can pin it on the special teams and the fact that we ran the same running play 30 times and made it easy for the Iowa State defense.

The defense did enough (in my opinion) to where we could’ve walked out of Ames with a win. I think Knowles got schooled a little bit in the 2nd half because Campbell was able to dink and dunk with long sustained drives which would force our offense to play hurry up.

If you look at our defense most of the season they’ve made 2nd half adjustments. If you look at this game and the K State game they didn’t really have to make any major adjustments at the half.

Our inability to sustain offensive drives, stupid play calling, and forcing our offense whose new identity is like a Bill Snyder K State football team, and not an offensive juggernaut that can score in two minutes is what cost us this game.

I’m really questioning the run calling today going into this game knowing that we weren’t going to run effectively against Iowa St.

You mean you question the coaches for running the same exact running play 32 times against the best rush defense in the conference? How dare you!!!

I know right, at least switch running backs to make it not so obvious.

They got a pretty good offensive line too, Purdy got all day to throw, another thing I give kudos to Iowa St for is they know how to utilize the TE position. I miss Jelani Woods. When I played QB in high-school my favorite target was the TE.

Yeah I agree with everything you said. I think our defense played very well ISU and Brock Purdy is a good team 24 points is doing your job. The two missed kicks is what ultimately doomed us. And I agree Sanders didn’t play bad and you can’t necessarily place the blame for this game on him, that falls on the kicker, but I do think Sanders is the biggest reason we can’t pass and our offense is so vanilla. I don’t think Gundy and Dunn trust him which leads to a lot of conservative run calls. Sanders problem is he isn’t very accurate and he doesn’t go through his progressions very well. Today he had Martin on that dig route wide open at about 15 yards multiple times and he never saw him I think he only threw it once or twice. In my opinion that’s what is holding the offense back.

You can run the ball 32 times through the same gaps against a defense with the 106th rush defense and eventually it might work.

You can’t do that chit against a legitimate top 20 rush defense and expect to get away with it. The fact these guys get paid hundreds of thousands of dollars or millions to be this stupid is amazing.

Kicker should share the blame with the stupid decision to go for a FG from 56 yards.

Expect the defense know what was coming and could stop or fine thier te. Except it Campbell wasn’t hiding anything

Expect the defense know what was coming and could stop or fine thier te. Except it Campbell wasn’t hiding anything

Imagine having an offense near the end of the game to at least get you within decent field goal range to try and send the game to overtime.

How many times did Campbell throw at his te. U think they could have bait a pic some where.

Did u want them to run up the middle instead

How many times do you run through the same gap before figuring out it’s not going to work against the top defense in the league?

So ur saying are defense isn’t that good