Friendly ISU fan here. What are your thoughts on the game this weekend and what in the world is going on in your QB room? Our offense sucks dognuts so be prepared to watch your defense have the game of their year.

mush, nothing goin on up there.

bad, don’t go in there

your defense have the game of their year

This is exactly what someone confident about their own defense would say!

I am confident in our defense. But ISU started conference play 0-5 and we rushed for like 9 yards against OUs defense soooooo…… don’t challenge us to a dognut sucking competition. We will put them beyond our Adam’s apples.

Should be a hell of a game then!

I don’t know that I have thoughts. You’re getting a game 2 QB in Rangel if Sander’s isn’t back yet. He showed promise in the second half against Kansas. Same might be true with ISU (new defense, has to get into the zone from scratch again) but if your defense has already put up points by then then it may be too late come second half.

I haven’t seen a single down of ISU football this year so I have no clue what the matchups will be either.

Our defense gave up 300+ rushing yards to both Kansas State and KU. Unless they’ve magically remembered how to play football I think you guys shouldn’t have too much of a problem being able to move the ball on us.

Sanders is almost certainly gonna be out, and our true freshman isn’t ready to play against your defense. As much as I want OSU to win this I think y’all are going to be happer than us Saturday night.

Our rushing attack was, last I looked, somewhere in the triple digits. Our #1 back has been dinged up year. You will see a true fresh who isn’t terrible but he’s a true freshman. Sprinkled in with another back that might be the shortest D1 player in history. But the line is more of the problem. They miss their assignments constantly. You don’t have to be good on D, just wait for one of our OL to just run right past you to for some reason feel the need to block a LB on the backside of a play.

If sanders plays, I don’t see how ISU wins. He won’t have to be special. 2 TDs would probably do it.

I can almost guarantee you Sanders won’t play though. I think the coaches are gonna want him as healthy as possible so he can maybe go for Bedlam.

Your last sentence is why I have zero confidence in this game.

Your last sentence is why I have zero confidence in this game.

Bro/Bro-ess right there with you

But the line is more of the problem. They miss their assignments constantly.

We have a lot in common. 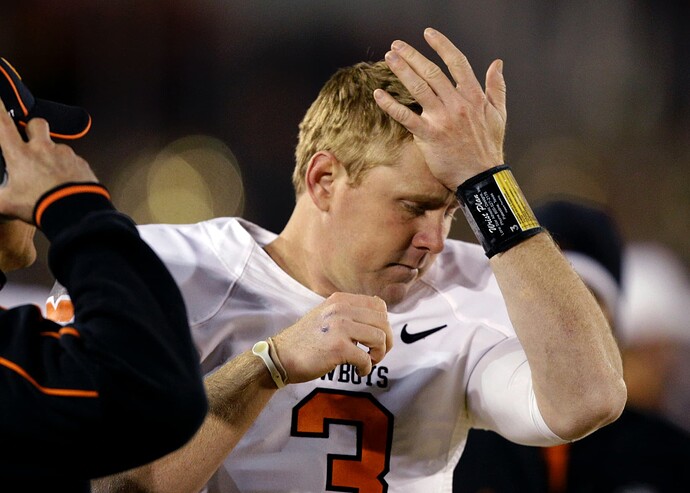 I feel like most B12 fans have a proper read on their teams except for Ou and UT, those guys are completely delirious. Oh, and don’t necessarily trust anyone in here that does not have a plus next to their name as legit, could be random trollers.

Anyways, pretty basic breakdown for us. Lots of talent on the defense, none of the show. Our backend will make Dekkers look like Josh Allen I promise. Our rush defense can be great one game, and then will be the worst in the conference the next. Last week KU was opening 6-7 yard holes (pause) on us every single play. We didn’t even try to stop the run. It was abysmal. On offense, we were #3 in the nation even with injuries up until KSU, and we randomly somehow turned into the worst offense in America. Then sanders got more hurt. The backup Rangel did fine in his debut, has some zip and accuracy on his throws. But don’t expect him to light you up, it was mostly fluff stats. Plus KU’s defense is trash. If sanders does play, it might be tough for you guys just because of how much more efficient the offense can be. But at this point I wouldn’t expect him. Right now I’m feeling a low to mid 20’s ish game and whichever offense sucks less / gives the ball up less will win. Leaning more toward ISU for the simple fact that the offense is bad but the defense is elite. Right now, OSU’s offense and defense are both horrible without sanders.

It’s still too soon for this.

You’re overestimating Dekkers but your point is heard. Stop the run, make him throw and he’ll screw up eventually. Gundy knows how to get points against ISU defenses. He always has. Get a lead before our DC tightens the screws and make Dekkers press. That’s how you beat ISU.

Fair point, I feel like we know each other so well by now. You guys are habitual OSU killers. Bad news for you is we don’t have much to play for now, so I think we have the advantage.

You don’t even have to try to stop our run, we’ll do that ourselves. Just don’t let us pass.

@CycloneFromUpNorth I just wanted to drop a note in here to say congratulations for beating Iowa! In many ways, ISU and OkState have a lot in common. And a chronic in-state rivalry issue is one of them

Like you, we more often than not find a way to lose to our in-state rival, University of Oklahoma (known in this forum as zeroU). You all beating Iowa makes the Big 12 look better

When OkState is humming along better, we joke in here about the Big 10 being crazy overrated besides Ohio State. But even Ohio State only plays a couple of important conference games, and everything else is a snooze fest. As both ISU and OkState well know, the Big 12 is a slog with every school being decent to pretty good despite Texas and Oklahoma being relatively down this year. Big 10 has like two “complete” teams and a whole bunch of other schools with busy punters

Oh, and like the others, my heart skips a beat every time I see ISU football. I still have PTSD after 2011. Feels like that was our one and only chance for a natty in the modern football era