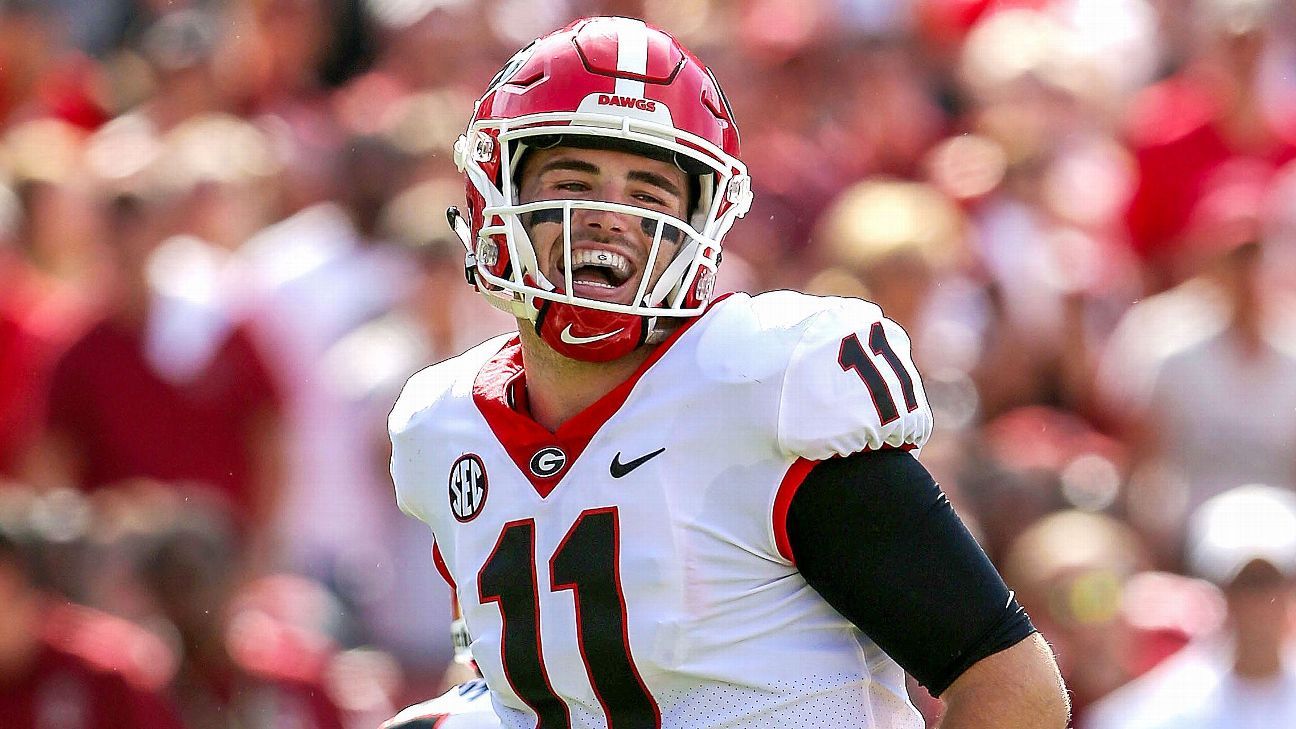 Which bowl game is in your team's future? Can Georgia close the deal on a national title? Our experts have the answers, months in advance.

So ESPN just released their bowl predictions for the season. They have us going to… Camping World or Alamo.

Thoughts on this? Based on their predictions, you’d think they would have us ranked.

Making those bowl games means 10 wins… Which is a great season everywhere but the PFB comments section or the die hard poke fans Facebook group.

Ambivalence about the bowl itself aside, playing Notre Dame would be fantastic. A blueblood we’ve never faced and would stand a good chance to beat.

I’ve wanted us to play Notre Dame in a bowl for the last decade!

You know what’s ridiculous, though? That all a 10-win Big 12 team gets is the Camping World Bowl.

Yeah against a 10 win ACC team. It’s a great bowl… It just has a bad name. I don’t know why our fans are so hung up on that. The match up against Virginia Tech was a great one.

Well said. The name really works against that bowl from a perception perspective.

It used to be the Russell Athletic bowl, which was regarding as a pretty good bowl. Once it switched it became perceived as a lesser bowl. It’s still 3rd B12- 3rd ACC if I’m right in terms of selection order.

According to these projections we would finish no worse than 4th in the Big 12. The Alamo would put us as 3rd with OU going to the playoffs and UT to the Sugar again.

The Outback Bowl has been around a lot longer, and has better name recognition, I’m willing to bet.

Same goes for the Gator Bowl…the Citrus Bowl…so on and so forth. We should be shooting for AT LEAST our #2 bowl every…single…year. (If we want to be taken seriously, that is…)

So your complaint is the name sucks? The Outback Bowl has been around a total of 4 more years than the Camping World Bowl, it has just had the benefit of a consistent named sponsor for the last 25 years.

The Big 12s second bowl, The Alamo Bowl is newer than The Camping World Bowl.

It’s not what our team measures as a success or a failure, it’s what we as fans measure as a good season or not… and there’s absolutely nothing wrong with the Camping World Bowl. In fact, it’s a great game. Great matchup. Great experience for the players and the fans that want to travel to Orlando.

By your logic, the Sun Bowl is a more prestigious bowl than the Fiesta Bowl. It’s been around longer. Notre Dame or USC plays in it a lot. It must be great!

Honestly, yes, I actually think that is the #1 issue. It’s a “brand” issue… kind of like Blue Blood team and non-Blue Blood teams. It will take a long time for “Camping World Bowl” to rise to “Blue Blood Bowl” status. The Fiesta Bowl used to be a nothing-bowl, but that changed over the years. That can happen here too, but will take time and some very relevant national matchups. The Orlando location is elite, which can help accelerate that rise.

I’m sure the bowl gets more money if it’s The Camping World Bowl vs The Valero Alamo Bowl, but I do wish the bowls would get a permanent name and then a sponsor over the top of that. It could have had a long history as The Tangerine Bowl if they had stuck with that.

Uh, no, I don’t think that about the Sun Bowl, at all. The Fiesta has been around long enough and can stand on its own.

But honestly, you tell me…what do people remember when it comes to what bowls were played in? Do people remember the Camping World Bowl…or the Cotton Bowl? Which one carries more weight, historically? (I randomly chose the Cotton, but any older bowl which hasn’t had a name change could fit).

I would even say your example, the Sun Bowl, would fit there as well. It has been around a very long time and is actually a fun bowl, usually. And the stadium it’s played in is cool.

For those of us of a certain age, there are two kinds of bowls: New Years Day bowls, and other bowls. You get a pretty significant prestige bump by being on New Year’s Day. That’s really not warranted since NYD is basically now just a Second Tier Big Ten / SEC Challenge, but that’s still the way it works in my mind.

If you went back through the last 10 years and objectively compared the teams in the Alamo, or even the Russell/Camping World, against the teams in the Outback or Citrus, I wouldn’t be surprised if the Alamo and CW came out on top. But they’re always going to feel inferior. The Holiday is another bowl that has consistently been of pretty high quality for a long time, but isn’t really regarded as upper tier.

And it’s too bad the Big 12 isn’t affiliated with the Holiday Bowl anymore, I loved that bowl.

Living in Arizona, I REALLY miss that one for the Big XII.