It looks like the Big 12 expansion saga will be finalized this week.

If the news is true we will stay a power 5. The money will be about what tge acc and pac get.

BUT delusional, we will not be looked at as a power five. This is so bad for osu football it’s sickening to watch this go down. I say dump football and let’s go be a dominant basketball program from here on out.

You do know once this happens osu will absolutely positively have no chance to win a national championship and probably will never win a playoff game. Ticket sales will dramatically go down for home games and people will eventually see there’s no hope. Basketball!!

U hate football so much u had to say it twice.
It’s that raiman syndrome kicking in.

this will be a fun conference to watch but monetarily we are going to be set back big time in the coming years. If the opportunity to jump ship arises then we absolutely should. We will have the lowest revenue shares of all major conferences which will hurt us in recruiting, facilities, etc etc. This conference is going to be fun to watch but we need to look out for our own interests

It’s being reported we will only lose about 5 million each team.

the money will not be comparable to the acc or pac-12 unfortunately. We will be worst of all power 5 conferences when it comes to market share. Even so, we just became a glorified american conference. The power 5 era is kinda over. It is power 4 now and we are on the outside looking in. We need to join the Pac-12 if possible. You need schools like USC and Oregon in a conference because they are revenue drivers. We will struggle financially compared to other conferences with no big names or blue bloods in the big 12. Instead of taking home 30m+ per season we will probably go down to 12-16m range without OU and Texas. People have crunched these numbers before, I need to find them again.

cons - less money compared to teams in other conferences means out program will advance at a slower pace relative to others.

i hope that you are correct, I have heard multiple figures brought up.

John Kurt has report thus. He got similar numbers from 2 sources. It would be great. If we only lose 5 that puts us rite in line with acc and pac12.

a report from the wichita eagle says bowslby projects each team to make 14m less per year without OU and texas. This is also before expansion tho. So 34m to about 20m a year. meanwhile the sec share per team is gonna rise dramatically and even the bottom feeders in that conference are gonna be getting paid like champions. Our projection after expansion is 22.5m a year instead of 30-35m. It’s gonna hurt. 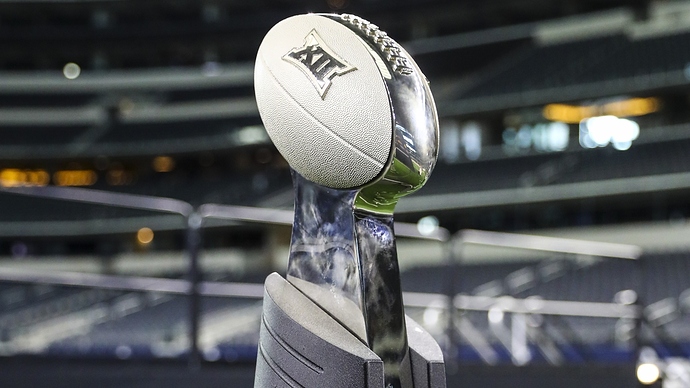 SicEm365 has continued to receive more details and clarification on the expansion process and what could be on the horizon.

How does this move make our path more difficult? We’re still better than the PAC12, top to bottom, and about equal to the ACC. We added a lot more eyeballs, and the country will be watching to see what this league does. But, have fun watching basketball!

so basically i think we should leave if another power 5 conference opens the doors. It makes more sense monetarily in the long run. Although this new alignment would be exciting to watch for us and we would likely be highly competitive in this alignment every year

Yes that 22.5 is suppose to be just the tv revenue.
The 37 million we get is not all tv.
Sicem365 is one of his sources.
To me makes sense, if the pay pac 12 for chit football at midnight.

LOL nobody is going to be watching what this league does man. Do you watch to see what the American conference is doing every year? The ship is sinking and it’s sad but it is what it is

I listened to the finebaum show this afternoon and he and other people calling in to his show around the states were basically laughing at the big twelve and finebaum said this league is is going to be between the American conference and a power5 but couldn’t see it being looked at as a power 5. This is reality but aging we have delusional people out here so.

There was a couple of good things I got out of u post. First ur the first to jump ship without a life preserve.
And u are dumb enough to watch finebaum show.

When we had ou in our conference and Texas we had a shot to be looked at as a contender. We run the table and no doubt about it we were in. This league you could run the table and be a14 seed in the playoff and have to play the number 1seed and if and I mean if we could run the table our recruits that we would get would be sticks and get killed in the playoff. If I’m missing something good at all about this move please tell me. Maybe gundy will be gone by then I guess.

He’s now on the sports animal