I’m just shocked. Patterson built TCU football from nothing. They went to 17 bowl games in their first 103 years of football and Patterson took them to 17 in 22 years. It’s been a rough time for a few years but it just feels dirty to do this to a dude they literally installed a statue of.

Everybody’s got a shelf life in their career. At some point we all have to move on and hopefully that happens before people start seeing you as a burden. This still feels disrespectful. Our “fans” chirp about Gundy the same way. Some were calling for him to be fired after ugly WINS against Missouri State and Tulsa. Now we’re 7-1. When the time comes I hope it’s a celebration for Gundy. He’s been every bit as critical for OSU as Patterson was for TCU. I hope we live up to our values of being loyal and true. 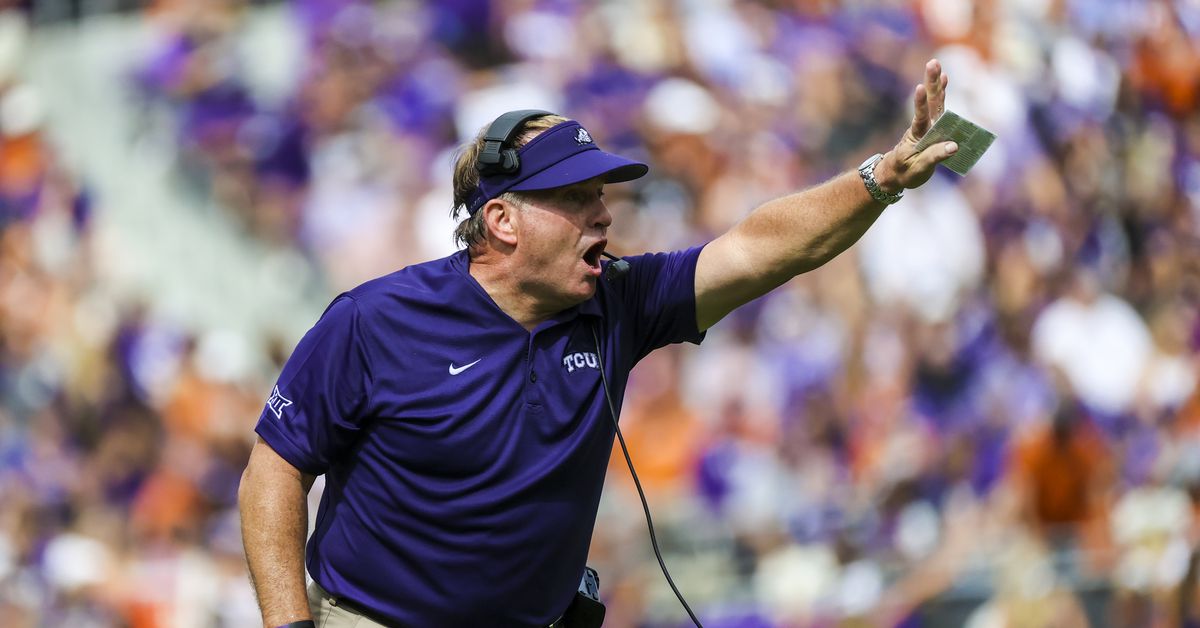 UPDATED: TCU Football HC Gary Patterson has stepped away from the program

TCU’s long-tenured football coach told players in a meeting Sunday that he is "stepping away", effective immediately. Jerry Kill will serve as the interim coach for the remainder of the 2021 season.

Totally agree, except I think Patterson was bigger for TCU than Gundy was for OSU. Oklahoma State already had some momentum in the right direction. Gundy took that momentum and transformed the program. TCU didn’t have much going for it when Patterson launched them.

I donsee what ur saying. One thing tho, Gary did inherit a nice program. They went to 3 bowls and 2 was titles.
I do think Gary knew it was about time 3 weeks prior he spent alot of time on an article about this in a news conference. U only do that if u think things aren’t going well.
Gary just wasn’t recuirting well. He is in the metro plex.
He should have been able to do more. He was under 500 after his last title run. Similar thing happened to snyder twice.
It’s sad because they my make a good hirer. We depend on the metro plex. Last thing we need is a better local recruiter. We sure dnt need smu in there too.
Yes the gundy haters thought this was their year. Picked 5th and barely able to beat an fcs team. It we hurt them if we make the title game or even worse win the league or the title game. The main problem with gundy his recruiting has been going up. I wish we had a full class this year.

This could be bad for OSU long term . Tcu is not a bad place to be . I’ve heard mixed reviews on their fans tho .

U mean we’re not the only school with fans like ar0 and joey.

All new hires bring a bit of hype. Thats why I want them to hirer dykes.
I do not want smu add too. The metro plex is hard enough to recruit with out another power 5 team.

I’d only take SMU IF we could drop baylor .

But yeah new hires bring hope and energy . But can they dance ?

Everybody acts like we only recruit Agaisnt ou and Texas. We lost a recruit to Baylor, tcu tech Arkansas and smu. We win more then we lose but it would make it hard with good coach at tcu and tech then add smu.

@Snappy I’m not surprised he was let go. When a HC has been at a program that long there’s a tendency for things to become stale and slides into mediocrity. They’ve been a .500 program since 2018. For the TCU administration, that isn’t acceptable for a power five program located in a huge, talent rich metro like DFW. The only thing that did surprise me was that it was done in the middle of the season and not at the end.

Gary Patterson is what Mike Gundy wouldve been without T.Boone. Thats not a knock or criticism of Gundy.

OSU, OU and Texas arent in on that many of the same kids in head-to-head battles on the recruiting trail

Tunnel vision. have i mentioned that.
First I think we are in alot more crossovers then u think.
Second my point is talking about we just can’t get recruits over these other schools just because of who we are.
U have a weird take on everything I’m glad I dnt mention usc.
Oh speaking of usc with the decommits usu has no recruits we have given offers to. We have two that usc offered. Both we high on usc. One made visits.

This a good point. Boone, miles dana, monken. Althouse guys made osu great. I wish we didn’t have gundy holding us back.
To another point Joey is having troubles understanding blue blood system I thought u could help him out.

“OSU, OU and Texas arent in on that many of the same kids in head-to-head battles on the recruiting trail” Explain to me how that’s a weird take?

Dude……USC has no coach. They have no staff. So how the hell do you expect them to have any recruits right now?

I really wish you understood recruiting and how it works. The difference between legitimate, hard offers and the discussion/number crunching that actually takes place through the 2-3 years of recruiting a kid. The kids that OU really, really competes with OSU to get are 1 of 2 types. A) An in-state stud. A kid that OU feels like is a sure-fire multi-year starter. That kid will be recruited hard by both staffs throughout his recruitment. Or B) A lower rated type kid on the defensive side (usually a 3 star) in this region that has been committed elsewhere to a “lesser” program that OU tries to get in on late to fill a need of a kid they missed out on. That’s the kids they’ll go head to head on. I know you’ll argue it somehow because you just don’t understand the recruiting front. None of this is a knock on OSU. They do more with less “star” rated kids every year.

First off idiot the two recruits we have committed before usc fired their coach. I wish u would speak about what u know oh yea u would speak sorry.
Ur second post is a true fact but has nothing to do with anything I’ve talked about. And u thinking osu doesn’t recruit the same kids that blue bb do and are not in the running u kidding urself. I can make u a list. We dnt win alot but we do make final cuts. U kill me. I understand everything u always try to act like u do. Like usc is a serious power.
Like the reciever we took off ur hands this year. Sure it came down to His brother. But. Do u think he would have drop ou for ksu. He knew his brother wasn’t going to get a offer from ou. So ur kidding ur self if u think it was only because some small time program offered his brother a scholarship. Do u think with all the brothers we have had play for us that didn’t play a big part. U had 2 other recievers decommit too. It didn’t take long for him to decommit. By the way his brother only in his second season of play football is going to be a big pick up too.

Dude you are the most rambling buffoon on this site. I do my best not wasting my time for the most part………but you reeled me in with the hopes of you being capable of having an intelligent discussion. So fool me once, shame on you. Fool me 110 times with your dumbassery…….shame on me. Tootles

Intelligent, u, give me a break. I told u, u didn’t get it rite the first time. But u came back with more crap.
First when I talked about usc recruits, u were wrong. When the 2 we have committed usc had a coach.

Second ur wrong about us being in with high recruits. We get on the final cuts of a bunch of players. So that means we do recruit with bb.
I ramble so much because u say so much wrong chit.

What u bring to the table is the constant belief in ur bb ou.

Ok, im going to try this again. Honest attempt here. What is the point of and what are you talking about the 2 “USC recruits” that i think youre saying are committed to OSU? Honestly explain this to me. I dont have any idea who youre talking about.

Please explain to me what you mean when you say
"we do recruit with bb". I want to know what youre saying before I respond

Im not even going to respond to you saying I believe in bb OU. Dude theyre soft. I said they pillowfight while OSU and ISU street fight. If thats somehow a belief in OU…then youre mistaken again

Personal I’ve find if stop posting. U can’t read my post without spinning it in ur head
It’s not my riting everyone else does fine. U remind me of Joey. Joe will read my post then tries to win points by spinning it.
Look I know the power of the bb’s. U make out that usc is still a top level bb. They are equal to Michigan. They not get all recruits over poorer school. They can’t even keep most of the kids in California at home. California also is a problem the state had 2 5 stars.
Lsu will get their coach then usc. Unless there is some new coaches out there usc is doom again. I haven’t seen a guy yet that fits usc. Then they will lose to byu.
How dies the pac12 look when byu wins 5 games and loses to baylor.