Fifteen years after Oklahoma snatched Ryan Broyles away from Oklahoma State, the Cowboys might have gotten their revenge. Edmond Santa Fe receiver Talyn Shettron flipped his commitment from the Sooners to the Cowboys on Wednesday. Shettron is a four-star prospect ranked 63rd overall in the 2022 class. His 0.9731 247Sports Composite score makes him the fifth-highest rated commit in OSU’s history. pic.twitter.com/iudjOfxbt5— TalynShettron (@TShettron) June 30, 2021 A 6-foot-3, 185-pound receiver, Shettron committed to Oklahoma in October over offers from OSU, Texas, Texas A&M, Auburn, Miami, Florida State and others. For what it’s worth, the Cowboys were Shettron’s first offer, coming back in May of 2019. Things shifted recently, as OSU offered Shettron’s brother, 2022 tight end Tabry Shettron on June 26. Tabry also committed to OSU on Wednesday. As a junior this past season, Talyn made 61 catches for 1,152 yards and 14 touchdowns. The Shettron brothers continue the Santa Fe to Stillwater pipeline that has brought the Cowboys Calvin Bundage, Trace Ford and Collin Oliver over recent years. The brothers are the 12th and 13th commitments of OSU’s 2022 class. They are the sixth and seventh Oklahomans to commit to OSU this cycle, as well, joining CJ Brown…

This is huge. Nobody saw this coming. This could give us some serious momentum on the recruiting trail specifically with Sexton. Even if nothing else comes of it this is still a huge get he’s a top 100 talent. Brennan Thompson I hope you’re paying attention you guys could make a star studded offense dangerous.

Surprising. Glad he came. Hopefully he will see the ball often.

We’re u wipe ur eyes off while typing. This must really hurt.
Tell ur buddy Joey we got yet another brother, he informed me we don’t get brothers.
This could do anything to with cowboy culture and family

How many times do I have to tell you I’m not crying. I’m just not satisfied with OSU finishing 3rd or 4th in the big 12 every year, beating OU only when the stars align, and not playing in the conference title game every 3ish years.

This is big. I hope banks and sexton are watching.
Have we ever had a decommit from ou at this level

Tell ur buddy Joey we got yet another brother, he informed me we don’t get brothers.

We also got Tylan Wallace and his brother, but still had a HC that found a way to avoid a conference title game.

There is a whole article on brothers. Go read it.

I’m glad they both committed. I’m just afraid of a couple of things:

I’m glad these new articles have given u a chance to repeat ur crying words. Dnt u get tired of type the same sad stuff.

Don’t you get tired of us being in 4th place? It’s good to get good players, but it doesn’t do us much good if we don’t use them at all or don’t use them correctly for the sake of seniority and experience.

Repeat conversation. How many freshman need to play to make u happy. Stop side stepping it. We had 6 last year that had a good amount of time. I’m not sure how many others. That to me means we played a good number of freshman

All I’m saying is that if you want better players to commit and stay you should probably change the recruiting pitch up some.

Practically telling them they’ll get the opportunity for 0 bedlam wins and 0 chances to play for a conference title their entire career at OSU probably won’t rub a talented recruit the right way.

Also, telling them their talent will take a back seat to seniority and experience no matter how good they are probably isn’t wise either. You can only use the “I’ll make sure your Cowboy Culture is overflowing” pitch so many times.

There has been a couple of articles on how is gundy keep players out of the portal. Also, I have point out u have to lose 4 a year if u want to have 25 next year.
Tcu got like17 recuirts last year. Had to let Richardson go( freshman who played for us) out of scholarships.
U just dnt know what ur talking about.

If u go back the last few each u would notice not only is recruiting better but more young players r playing.

Of the recent losses via transfer portal, Woods is the one that hurts the Cowboys the most. The 6-foot-7 “Cowboy back” was OSU’s top tight end/fullback hybrid for pretty much his whole college career. Though criminally underutilized, Woods’ big body and ability to move like a tight end made him a lethal blocker in the run game.

It makes sense that Woods would choose to leave after being neglected for three seasons. He only totaled eight catches this season as the teams’ starting tight end even though he towered over all defenders. The Cowboys coaching staff never catered to his strengths, instead opting to use him the same as every tight end on the roster; a quicker lineman who occasionally ran routes. It leaves me wondering what could’ve been, as well as excited to see what he can do in an actual offense. 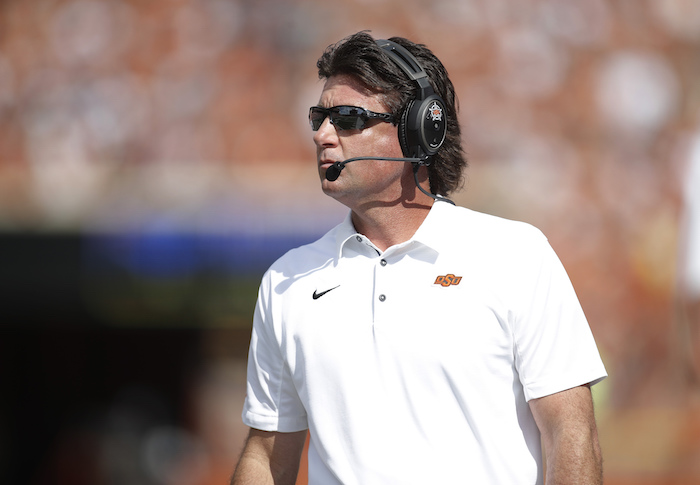 In the span of a week, Mike Gundy and Oklahoma State have had five players enter the transfer portal. Redshirt sophomore tight end Jelani Woods, the most recent departee,  announced on Monday he would forego the teams’ bowl game against Miami...

Now my lil idiot. We have talked about this.
Go see how many ou has lost.
2 were kicked off and the rest suck.
How many are playing at north Texas.

Don’t you get tired of us being in 4th place? It’s good to get good players, but it doesn’t do us much good if we don’t use them at all or don’t use them correctly for the sake of seniority and experience.

Don’t you get tired of posting the same ■■■■ thing every ■■■■ day? Your shyt is played the hell out.

Of the recent losses via transfer portal, Woods is the one that hurts the Cowboys the most. The 6-foot-7 “Cowboy back” was OSU’s top tight end/fullback hybrid for pretty much his whole college career. Though criminally underutilized.

This goes to show pure ignorance.

He is underutilized but hurt the Cowboys the most?

He was going to make his money in the NFL as a blocker. Okla St is not going change their offense for one player. They developed his skills as a blocker. There is no ill will for him transferring as a graduate. He found fit where he could put on tape other skills as a TE. He could of left after he realized he was not cut out as a QB. Why didn’t he transfer then?

You make no sense. You stay dumbing down people.