Where does this leave osu

I have heard slot from people.

Go ask big 10 and sec to join. Im sure our guys have done that and will continue.
Big 10 will stick to there guns about academics. Sorry. Maybe when there up to 24 schools.

Sec we would be a filler to some acc schools. 3 acc and us.

I have heard go get Louisville for the big 12. The whole problem is money. Acc teams have 10 years of contracts. Any movement out of the acc is highly unlikely.
We could lose a team to partner up with nd.

I hal heard cal au asu and Colorado why. For tv market. Ask ku the keep selling the kc market, nobody watches bad football.
If we going to 16 the best would be get washington Oregon and Utah. Then go get Memphis or usf.
Making it a good pod system.
Old big 8 old southwest west coast east coast.
Osu, ksu, isu and ku
Tech, tcu, Baylor and Houston
Oregon washington, utah and byu
West Virginia, cincy,ucf and usf or Memphis.

This gives us the best best and travel blance.

I dnt want a merger. No one watches pac 12 games. This gives us 2 games in 4 time zones. When we played Oregon state at 10 on fsc we got 700k. Thats is great numbers but they werent watching a bad Oregon state team. That was there 2nd best game. What would the numbers be for Oregon. Just get the best leave the junk teams.

With add the 4 i think we could push over 50 mill each team make some week 24 team deal we wont make 40 mill.

Memphis, CU and some mixture of the Arizona schools or Utah seem doable . Oregon and Washington would be great but unlikely imo

Where is Oregon and washington going. Tbey ask to join the big 10. Big 10 said they are full.

The big 10 has said they are wait to see about nd. That means Oregon mite go. Its got to happen before 24’.
My next chose would be stanford.

Here’s one way how I could see it going forward:

One problem does any of the acc teams have the money to pay of 10 years. Plus if nd goes they dnt need both of the pac 12 teams.

I just don’t like the idea of watching us or really anyone else playing at 9-10 at night. The majority of games have been played. We won’t get the exposure we need playing late. I had rather go east , have at least 2 prime time games in the central time zone. I think if the SEC expands more we will get an invite

I know what your say about a west coast pod. But why would that have anything to do with notter dame.
If they want notre dame and those 2 they still need another school. Why the hold up.

My guess: Notre Dame is the linchpin in their future expansion plans so what they decide to do will dictate who the Big Ten adds next. So get Notre Dame committed to joining the Big Ten first before sending out any other invites.
Now, if Notre Dame, Oregon, and Washington gets added to the Big Ten, the fourth team will probably come from the ACC. My guess is that it will be North Carolina. It expands the Big 10 footprint while still being close to the main bulk of the conference, solid in football, great in basketball, and they’re a AAU university, which is pretty much a requirement for Big 10 membership.

I dnt see any acc team being taken soon the would have to pay 8 years and an exit fee.
I dnt think nd is in a hurry. You ask acc, nd is going to acc.

The deal with wash and Oregon there tv deal is up in 2 years. So they need to find a deal in 2 years.

By get usc nd mite act

Does ND still have the contract with NBC ? If so they aren’t in a hurry to go anywhere. They still think they are the supreme power. They will be the last to commit. All this coast to coast BS will make it hard on the minor sports

Its getting heated up washington has a bill this week to keep the 2 school in the same league.

That contact is only like 18 million. I was suprised to read that. Nd would have to play out for non football sports. Neither of these are major issues

That’s all it is ? That surprised me …… course it was made several years ago too

I dnt see Washington or Oregon go to big 10. Stanford would be the partner for noter dame

CBS had an article about all the realignment possibilities/speculation. One thing proposed was to “get the top schools in the Big 12 and Pac-12 to agree that forming a new conference is in their best interest.” Here’s what they drew up: 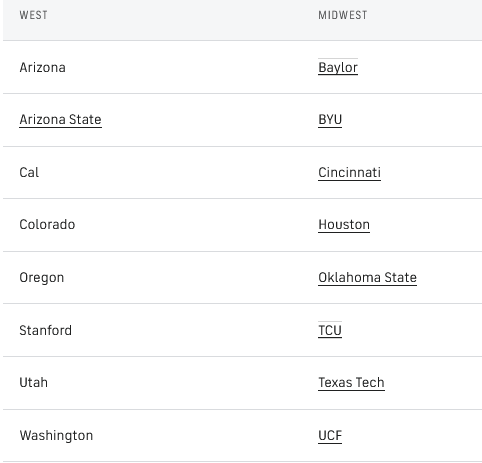 Personally, I would flip Colorado and BYU. Chances are slim to none this actually happens but it was interesting and liked some of the logic to it:
" The Pac-12 schools get recruiting access to Texas and extend their reach into the Central Time Zone. The Big 12 schools get recruiting access to California while adding the Phoenix, Denver and Seattle media markets.
That hybrid conference might look better than anything one league could form by taking a couple teams from the other. And if the idea is get as close as possible in revenue to the SEC and Big Ten, it might be the best lineup."

Realignment may cool off for the holiday, but it's about to pick up again any day now

This doent make any sense. Cal az asu and Colorado are dumpster fires. Im not kick out ksu, wv and isu for any of those 4.
We got 2 years of these lol

Well, if this is to be believed I was 75% right. Supposedly, the Big 10 wants Notre Dam, Oregon, Stanford, and North Carolina. 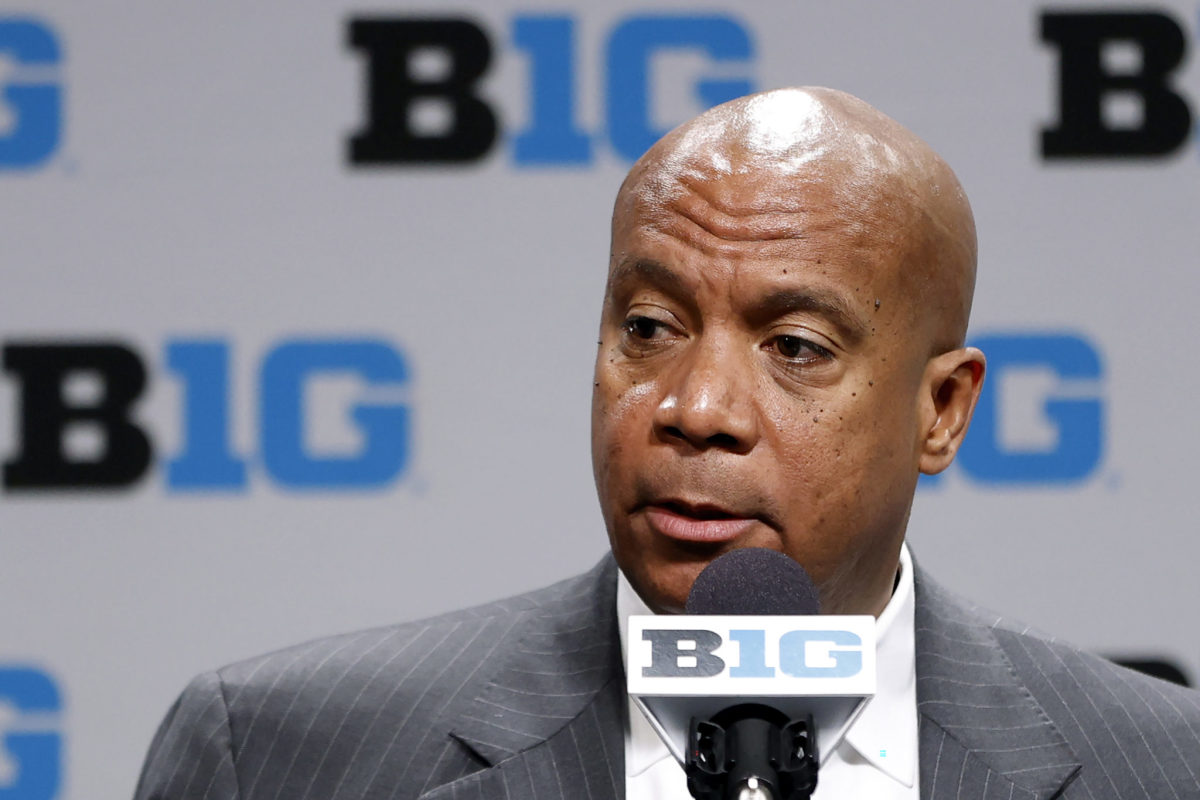 Report: Big Ten Has These 4 Schools On Its Wish List

The Big Ten stole the headlines in college sports last week with its bold move to secure USC and UCLA in conference expansion. Once news broke, many