If Williams leaves ou. How will that effect osu.
Could things unravel for ou. Could others leave.
Upon this they have had losses already.

Gentry still hasn’t signed Could we get him. Another inside guy. Getting these guys could help us down the road complete for the best oklahoma kids.

Then ou has to go to the sec. We all know it doesn’t take a few things to collapse a program.
Going from a filthy rich qb school to hunting down rejects from other schools.

But I love the idea of OU struggling for the foreseeable future. Great ideas, just don’t think it’ll happen.

I think it’s a bidding war. So who need a qb and has money. If he stay it was about money for sure.
His name is out thier so it can happen.
He has look at who he will be playing with and how good they are. And the coaches.
One thing is Williams lost those games. Played half the season and lost 2.

Don’t think he goes back to uo, even the inside homer Dean doesn’t think so. It’s a bidding war uo can’t do unless some rich donor puts it up …. They gonna have to have money for the others

Well I think it’s alot about money. But, if he finds some in a better place he is gone. Ou has lost a lot of guys via portal. It’s hard to replace so many. New coach new staff. 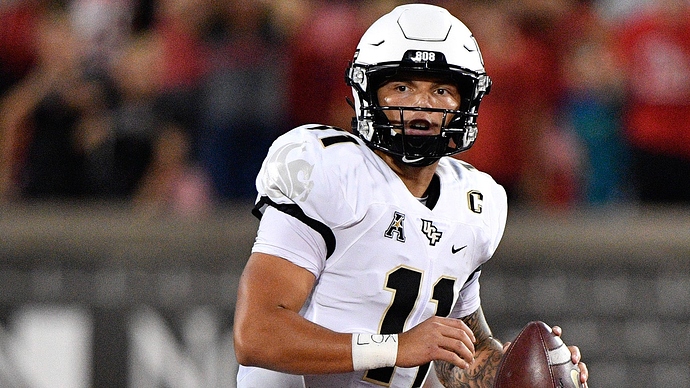 Just hours after OU quarterback Caleb Williams announced he was entering the transfer portal, the Sooners have bolstered their quarterback room.

I saw that. Yes very interesting.
We got a lot of our goes going. But ou could still be in motion.
I hope they enjoy the sec

Couldn’t happen to a better university. On a serious note if the NIL rumors are true regarding this college football is going to see some real dark times. If OU can’t compete financially with NIL that is seriously concerning.

That debt ur talking about is like a mortgage. They pay for nil with donor money.
Look at Texas they have more debt. Just spent 20 mill for a new coach and being a new qb plus 50 grand for line men.
With the oc qb coming in they may think they won’t need Williams

@robert28 "Could things unravel for ou. Could others leave" Others will leave. That will be fact. OU will feel some hurt from this deal, but its still the chain reaction from the Riley departure. Its also part of the fallout from the culture that Riley created during his tenure. The new regime will not found the program the same way that Riley has. Im not completely disregarding the success that Riley had, but he was about showing guys how to get to the NFL. That was the massive part of their recruiting pitch and how they marketed those players while they were here. OU WILL NOT GET INTO BIDDING WARS FOR ANYONE. OU is still at a crossroads like I said they were when Riley left. OU isnt going to forget how to play football. Once in the SEC, they will be competitive. They will not be the big dawg over there like they are in this Conf. They will compete in some years to win the SEC. They will also go 8-5.

"Gentry still hasn’t signed Could we get him." OU got the Clemson DLine coach and will likely be getting the Bama Secondary guy. Gentry will be an OU signee

What I fine most interesting about riley is, could he be the down fall of two blue bloods.

OU and USC long term will not be effected negatively by Riley. Schnellenberger didn’t ruin OU. I know what you think of USC. But they will win again. There’s too much talent right there to not

I have no idea why u think a guy who came in to help out for a year ruin ou.
The problem osu had when ou was bad we were too. I think the ou coaches r good enough. But with out players from transfers, it’s out of the coaches hands.
If riley does the same of soft play at usc well that opens doors to others.
I do know ou with out top notch coaching will have serious troubles in the sec. Which to me is 8 and 5.

I’m just putting it out their.
Look riley has already made it know he needs to change over 20 positions. That doesn’t inspire ur team u have today. I have looked at usc class but alot of mayhem has been going on. Same with ou. They have a better class but thur graduation nfl and portal, it’s seem they will need the best coaches
It’s not just those look at how tcu did I mean it wrecked them team. Tech didn’t hurt as bad because those players were still better of staying.

Usc has a buffer built in called a bad conference
Ou has to get it rite on everything if they dnt want to fall flat in sec. And they will have to pay look at Texas.
Not sure about ewers he was going to be a third stringer.
Yes if I were u I wouldn’t want me to be half rite.

Oh they want him back I think, it’s whether they can hit some rich alumni up for the money Boren spent them to bankruptcy, all the rich donors may be finished with it But they will need more for the rest of the team too

Yea they need alot on the defense side or it look like a leach tech team.

You guys really have a shortsighted view of history & no concept of what a program needs to be sustained over a long period of time. Don’t let your dislike of a university cloud your ability to use common sense. The floor will be lower in the SEC……but the ceiling will be higher. OU will experience both of those.

I think u have tunnel vision and only see the good side of ou. I bet there were thousands of lil

slices running and Lincoln 15 years ago. Saying the same chit. I can clearly say I dnt like ou. But that has nothing to do with the stuff going on in norman. I’m sure they can get enough players to get at least 10 wins next year. But ur going into a league that is at least 25 % tuffer.